Coronavirus News: US sets stage for boosters | Importance of nuance when dealing with COVID | How 'dark winter' can be avoided | Latest cases in DC region
Home » National News » After Ida's fury, infrastructure…

Deadly flooding delivered to the Northeast by the torrential rains of what remained of Hurricane Ida has brought a new…
Listen now to WTOP News WTOP.com | Alexa | Google Home | WTOP App | 103.5 FM

Deadly flooding delivered to the Northeast by the torrential rains of what remained of Hurricane Ida has brought a new urgency and a fresh look to how roads, sewers, bridges and other infrastructure must be improved to prevent such a catastrophe from happening again.

The world is changing and “our whole mindset, the playbook that we use,” must change too, New Jersey Gov. Phil Murphy said Thursday as he toured Mullica Hills, New Jersey, where a 150-mph (241 kph) tornado splintered homes. “We have got to leap forward and get out ahead of this.”

The devastation exposed flaws in preparation plans even after New Jersey and New York spent billions of dollars to prevent a reoccurrence of Superstorm Sandy’s destruction in 2012, with much spent to protect coastal communities.

Hochul and Murphy, both Democrats, agreed that the increasing frequency and intensity of storms demand a new approach that factors in flash floods.

The storm dumped so much rain so fast that a record 3 inches (7.5 centimeters) fell in an hour in New York Wednesday, overwhelming drainage systems. Some lives were lost when water flooded basement apartments, subway stations and vehicles. At least 50 people died in five northeastern states.

“I don’t think many people could have predicted the severity of the loss of life and damage done by the flash rains,” said Dr. Irwin Redlener, founding director of the National Center for Disaster Preparedness at Columbia University. “People drowning in their basement apartments, in cars and so on is not something we typically would ever see in New York.”

Hochul promised new answers to pressing questions, like whether warnings were clear enough and communications with the weather service were flawed as well as if subways needed a faster shutdown.

The effects of climate change are “happening right now,” Hochul said. “It is not a future threat.”

Warnings of worsening storm damage are not new.

In August 2011, the aftermath of Hurricane Irene killed six in Vermont, left thousands homeless, and damaged or destroyed over 200 bridges and 500 miles of highway. Of the state’s 251 towns, 225 had infrastructure damage. Thirteen communities were severed from the outside world after flooding washed out roads, electricity and telephone communication. National Guard helicopters ferried supplies to stranded residents for days.

More than half a billion dollars was spent by the state and federal governments, and in donations by private individuals, to help Vermont recover.

To weaken effects of future storms, New York and other areas can learn from other cities like Singapore, Copenhagen and Amsterdam, where solutions included turning asphalt parking lots and schoolyards into spaces that can retain water, said Amy Chester, managing director for the nonprofit Rebuild by Design.

“Climate change is expensive. We’re going to have to spend money on it and every single dollar we spend in any type of infrastructure needs to take into consideration the future,” she said.

He noted that the city’s aging subway system has long been relied upon to absorb excess water from heavy rains, but that was before record rainfalls set off unprecedented flooding.

“That can’t work because there’s people in the subways and we have to think about their safety also,” he said.

And he said the future of New York City’s basement apartments, which could number in the thousands, must be reconsidered.

“What are we going to do for them now and what are we gonna do for people in the future? Are we going to even permit people legally to live in basement apartments, and if not, do we have the capacity and the resources to have other alternatives? I don’t know that we do,” he said.

The system for warning people in areas threatened must be rethought and plans should be in place for what people should do and where they should go, he said.

Linda Shi, an assistant professor in the department of city and regional planning at Cornell University, said there are limits to what infrastructure improvements such as larger storm pipes and road elevation can bring.

She said most planners agree the strategies only buy time.

If the worsening storm trends continue, she said, ultimately there will be increased conversations about “managed retreat.” 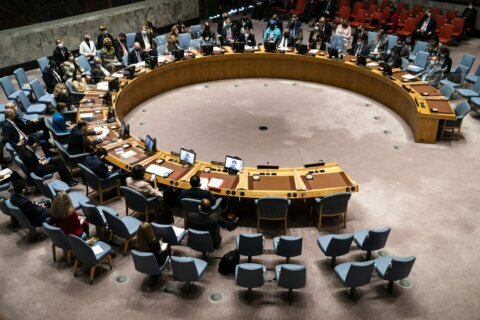 Leaders to UN: A warmer world is a more violent one, too