Coronavirus News: US sets stage for boosters | Importance of nuance when dealing with COVID | How 'dark winter' can be avoided | Latest cases in DC region
Home » National News » More protection: US likely…

U.S. experts are expected to recommend COVID-19 vaccine boosters for all Americans, regardless of age, eight months after they received their second dose of the shot, to ensure lasting protection against the coronavirus as the delta variant spreads across the country.
Listen now to WTOP News WTOP.com | Alexa | Google Home | WTOP App | 103.5 FM

WASHINGTON (AP) — After struggling for months to persuade Americans to get the COVID-19 vaccine, U.S. health officials could soon face a fresh challenge: talking vaccinated people into getting booster shots to gain longer-lasting protection as the delta variant sends infections soaring again.

As early as Wednesday, U.S. health authorities are expected to recommend an extra dose of the vaccine for all Americans eight months after they get their second shot, according to two people who spoke to The Associated Press on condition of anonymity to discuss internal deliberations.

That means the biggest vaccination drive in U.S. history is about to get even more extensive.

The move is being driven by both the highly contagious variant and preliminary evidence that the vaccine’s protective effect starts dropping within months.

Last week, U.S. health officials recommended boosters for some people with weakened immune systems, such as cancer patients and organ transplant recipients. If the shots are expanded as expected to other Americans, among the first to receive them could be health care workers, nursing home residents and other older people.

Some experts have expressed concern that a new campaign calling for boosters could muddle the public health message and undercut the continuing drive to win over the tens of millions of Americans who are hesitant to get their first COVID-19 shots.

Calling for third doses could discourage people who had been skeptical of the shot’s effectiveness in the first place, Lawrence Gostin, a public health specialist at Georgetown University, warned on Tuesday.

“We have to really make sure that while we’re spending a lot of time and effort on third doses that we don’t undermine our campaign for first vaccinations,” he said. “That’s truly the existential crisis in the United States.”

The booster campaign could also cause ill will toward the United States: Global health officials, including the World Health Organization, have called on wealthier nations to hold off on booster shots to ensure poor countries have enough vaccine for the initial doses.

Dr. Tlaleng Mofokeng, a South African expert advising the United Nations, condemned the move toward booster shots in the U.S., saying it will have the effect of “advancing and deepening the existing inequities” when “there are people who are yet to receive a single shot.”

But White House press secretary Jen Psaki said the question of whether to distribute boosters or help other nations “is a false choice. We can do both.”

She said the U.S. is “far and away” the biggest contributor to the global fight against COVID-19 and will “continue to be the arsenal for vaccines” to the world.

Booster shots would only begin to be administered widely once the U.S. Food and Drug Administration formally approves the vaccines, which are being dispensed for now under what is known as emergency use authorization. Full approval of the Pfizer shot is expected in the coming weeks.

More than 198 million Americans have received at least one dose of a COVID-19 vaccine, or 70% of those who are eligible, according to the Centers for Disease Control and Prevention. Just under 60% of Americans 12 and older are fully vaccinated.

The vaccination drive has been slower than the Biden administration had hoped for. At the same time, the variant is spreading aggressively through unvaccinated communities and also causing an increasing number of “breakthrough infections” of fully inoculated people.

Studies show the vaccine remains highly protective against severe COVID-19, but results from Israel released last month suggest its effect wanes. Its effectiveness against symptomatic infection peaked at 96% two months after study participants got their second dose. By six months, it was down to about 84%.

Israel, which exclusively administered the Pfizer shot, has been offering a booster to people over 50 to control its delta surge. Researchers are still trying to understand to what extent the breakthrough infections are due to waning immunity or vulnerability to the delta variant.

The new urgency from U.S. officials reflects how quickly the variant has knocked the country back on its heels.

On July Fourth, President Joe Biden proclaimed that the nation was declaring its independence from the virus. But since then, infections, hospitalizations and deaths have increased nationwide, overloading emergency rooms across parts of the South and West.

On Monday, Pfizer and its partner BioNTech submitted data to the FDA to support authorizing a booster shot for the general public. Pfizer said a small study showed people who received a third dose had higher levels of antibodies against several versions of the coronavirus, including the delta variant. The company is working on a larger study.

Dr. William Moss of Johns Hopkins University said more data is needed on whether waning antibody levels lead to hospitalizations and deaths. The antibody research alone is “insufficient to call for booster doses for the general population.”

Americans who received the earliest doses of Pfizer’s vaccine — mainly health care workers and nursing home residents — are approaching the eight-month mark from when they received their second dose.

“There is a concern that the vaccine may start to wane in its effectiveness,” the director of the National Institutes of Health, Dr. Francis Collins, said over the weekend. “And delta is a nasty one for us to try to deal with. The combination of those two means we may need boosters.”

The Pfizer and Moderna vaccines are administered in two doses. Officials are continuing to collect information as well about the one-shot Johnson & Johnson vaccine, which was only approved in the U.S. in late February, to determine when to recommend boosters. 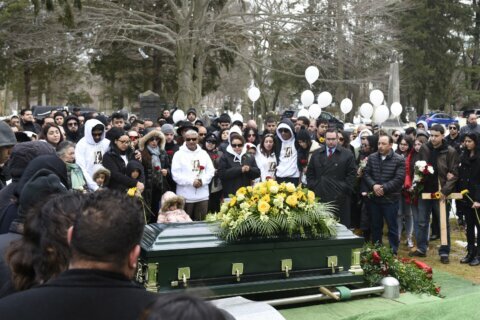