WEST MELBOURNE, Fla. (AP) — A Florida deputy was wounded, and the man who shot him was killed during a…
Listen now to WTOP News WTOP.com | Alexa | Google Home | WTOP App | 103.5 FM

WEST MELBOURNE, Fla. (AP) — A Florida deputy was wounded, and the man who shot him was killed during a traffic stop Monday afternoon, authorities said.

The confrontation occurred around 1 p.m. on a West Melbourne street near Interstate 95, Brevard County Sheriff Wayne Ivey said in a video posted on Facebook. The wounded deputy was expected to make a full recovery.

A deputy pulled over a vehicle with three occupants and a two-month old baby inside and was quickly joined by a second deputy, Ivey said. After a passenger in the back seat was asked the exit the vehicle, he pulled out a short-stock rifle and opened fire, striking one of the deputies in the leg, the sheriff said.

Both deputies returned fire, Ivey said. The man eventually ran over to one of the deputies and began to hit him with the butt of the rifle. The other deputy fired multiple times at the man, killing him.

“I could not be more proud of our deputies, as they are true heroes,” Ivey said.

Officials didn’t immediately release the names or races of the deputies or the man who was killed. Ivey said the shooter had a long criminal history that includes 23 felony arrests and 17 misdemeanors. He also had several warrants for his arrest, the sheriff said. 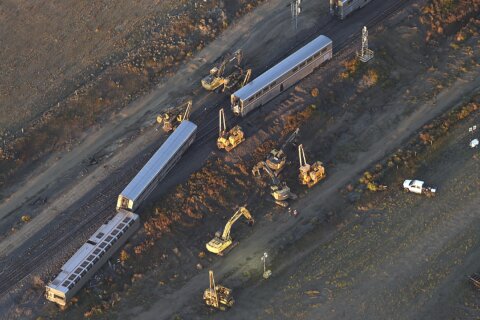