BOSTON (AP) — Former congressman Joseph P. Kennedy II, the oldest son of Robert F. Kennedy, denounced the possible parole of the man convicted of killing his father in California in 1968.

“Two commissioners of the 18-member California Parole Board made a grievous error last Friday in recommending the release of the man who murdered my father,” Kennedy wrote in the emailed statement released Sunday. “I understand that there are differing views about ending the sentence of this killer, including within my own family. But emotions and opinions do not change facts or history.”

The board on Friday found that Sirhan Sirhan, 77, no longer poses a threat to society, noting that he had enrolled in more than 20 programs including anger management classes, Tai Chi and Alcoholics Anonymous meetings.

The ruling will be reviewed over the next four months by the board’s staff. Then it will be sent to the governor, who will have 30 days to decide whether to grant it, reverse it or modify it.

“I hope the full parole board will reverse the decision over the ongoing review period and that the California governor, if faced with the choice to release him, will keep him in prison to serve out his full life sentence,” Kennedy wrote.

California Gov. Gavin Newsom’s office issued a statement Monday saying the case now is before the board, and he can’t comment until it is before him “without compromising the legal validity of his decision.”

Robert F. Kennedy was a U.S. senator from New York and the brother of President John F. Kennedy, who was assassinated in 1963. RFK was seeking the Democratic presidential nomination when he was gunned down at the Ambassador Hotel in Los Angeles moments after delivering a victory speech in the pivotal California primary. Five others were wounded.

Joe Kennedy II is one of RFK and Ethel Kennedy’s 11 children, nine of whom are still alive. Two of them, Robert F. Kennedy Jr., and Douglas Kennedy, said they supported the release of Sirhan.

Joe Kennedy and five of his siblings said Friday they oppose parole and pledged to fight the process every step of the way. He was joined by Courtney Kennedy, Kerry Kennedy, Christopher G. Kennedy, Maxwell T. Kennedy and Rory Kennedy.

Joe Kennedy said Sunday that anyone who kills for political reasons should “know that he will at a minimum spend life in prison without parole. ”

“The prisoner killed my father because of his support of Israel,” Kennedy wrote in a separate statement. “The man was tried, convicted and sentenced to death. Yet he now may walk free, no doubt to the cheers of those who share his views. Let there be no mistake, the prisoner’s release will be celebrated by those who believe that political disagreements can be solved by a gun.”

Kennedy, on a more personal note, spoke of growing up without a father.

“The prisoner left a pregnant mother of ten without a husband and soon-to-be 11 children without a father.”

He added: “We miss him every moment of every day, and struggle to understand why the prisoner should be able to enjoy the golden years of his life when he so viciously stole them from our father.”

Sirhan was originally sentenced to death but that has already been reduced to life in prison, Kennedy noted.

“My mother, Ethel Kennedy, and my uncle, Sen. Edward M. Kennedy, asked that his death sentence be reduced to life imprisonment as a demonstration of mercy. He received that mercy,” Kennedy wrote. “No one should have the right to alter the lesser sentence requested by the person most affected by my father’s death — his wife, whose last child would never know a father’s touch. Nothing written, said or done will ever change that reality.” 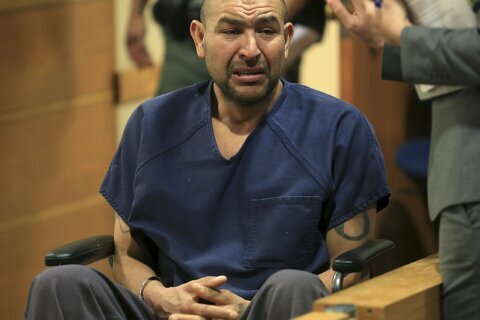