MADISON, Wis. (AP) — The leader of the Wiscocnsin Assembly’s elections committee issued subpoenas Friday demanding extensive election materials, including all ballots and voting machines from two counties in what she called a “top-to-bottom” investigation of the state’s 2020 presidential results.

Republican state Rep. Janel Brandtjen sent the subpoenas to Milwaukee and Brown counties. She said last month that she wanted to conduct a review similar to a widely discredited audit performed in Arizona. Brandtjen and other Wisconsin Republicans traveled to that state in June to observe the review.

It’s unclear, however, whether the Wisconsin review will happen. Two other investigations of the election results are already underway and Assembly Speaker Robin Vos signaled that he doesn’t support a third probe. The Legislature’s attorneys said in a June memo that only Vos has the power to issue subpoenas.

Brandtjen didn’t respond to messages Friday morning seeking comment. She spoke at a noon rally at the state Capitol celebrating the subpoenas, however, and promised to put questions about election fraud to rest.

“We’re finally going to put this to bed,” she said to applause and cheers. She left the rally without speaking with reporters.

Former President Donald Trump has been pressuring Wisconsin Republicans to take a closer look at the presidential results in the state, which Joe Biden won by about 20,000 votes.

No one has produced any evidence of widespread election fraud in Wisconsin and Biden’s victory withstood a partial recount Trump ordered in Milwaukee and Dane counties, both Democratic strongholds.

Still, Vos has hired private investigators to review the results and the Legislature Audit Bureau has launched its own investigation. Vos said last month he doesn’t know what a third review would prove and wouldn’t commit to giving Brandtjen any additional resources. Vos’ spokeswoman didn’t reply to messages Friday.

Brandtjen said in a news release that she welcomes both probes. But Wisconsin residents have objected to the audit bureau review because it’s taking too long and she wants to give people a “transparent, full, cyber-forensic audit,” she said.

The subpoenas demand that Milwaukee County Clerk George Christenson and Brown County Clerk Patrick Moynihan appear before the committee on Sept. 7 and bring along all ballots cast in the presidential elections in the counties, including mail-in, provisional and physical ballots.

They also must turn over all their tabulation equipment, software, images taken from their election management servers, routers and networking equipment, all absentee ballot logs, media used to transfer data such as flash drives and external hard drives, lists of all internet addresses used at any location where election equipment was used, names of voters and their addresses and birthdates and dates and times equipment was certified.

“She’s fulfilling exactly in lock-step what these forces have been pushing for,” Hintz said. “I’m not surprised someone pulled the puppet string. It really should be viewed as an attack on our country and an attack on our election system.”

Nellie Sires, executive director of the Democratic Party of Wisconsin, called the subpoenas “absurd and unenforceable.” She said Republicans are trying to bring “an Arizona-style Cyber Ninja circus” to Wisconsin and that Vos has lost control of his caucus.

“The amateur-hour theatrics on display today would be funny if the stakes for our democracy were not so high,” Sires said. 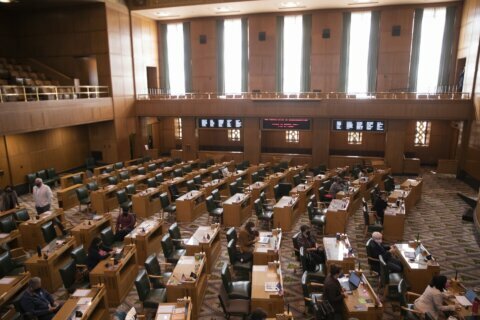