Eduard Florea, 41, of Middle Village, Queens, pleaded guilty by video from a federal jail in Brooklyn after technical difficulties canceled a plea hearing last week. Sentencing is scheduled for Nov. 29. Florea faces up to 15 years in prison, but under federal sentencing guidelines he’ll likely be ordered to spend about 15 to 21 months behind bars.

“With today’s guilty plea, Florea admits to threatening the life of a successful candidate for the U.S. Senate and to urging others to take up arms to unleash violence at the Capitol on January 6, 2021 to thwart the results of the Presidential election,” Acting U.S. Attorney Jacquelyn Kasulis said in a statement.

About 580 people have been charged with federal crimes after supporters of former President Donald Trump violently broke into the Capitol to disrupt the certification of President Joe Biden’s victory. The uprising led to Trump’s second impeachment and the start last month of congressional hearings. More than 30 people have pleaded guilty.

A message seeking comment was left with Florea’s lawyer, assistant federal public defender Mia Eisner-Grynberg. After Florea’s arrest in January, she dismissed the online posts as “blather” and said he didn’t condone the violence at the U.S. Capitol.

Florea’s wife, Joni, told WPIX-TV at the time that he “was convinced he was going to have to go out and fight a civil war” and that he would’ve gone to Washington had his ride shown up. Joni Florea told the station that her husband was an abusive, “horrible monster” who threatened her with guns and knives, kept a box of Nazi memorabilia and defended the domestic terrorist known as the Unabomber.

Florea, a software engineer posting as “LoneWolfWar” on the right-wing social network Parler, wrote “the time for peace and civility is over” and “it’s time to unleash some violence” as Trump’s supporters stormed the halls of Congress on Jan. 6. In another post, he urged: “Kill them all… And anyone who stands in the way.”

The night before the riot, Florea made several posts threatening the life of U.S. Sen. Raphael Warnock, a Democrat who was on his way to winning of a Georgia special election, prosecutors said. In one of them, Florea wrote: “dead men can’t pass (expletive) laws.”

A message seeking comment was left with Warnock’s office.

Because of a prior felony gun conviction — a 2014 case that prosecutors said involved the possession of about a dozen firearms, including a machine gun and high-capacity magazines — Florea was barred from owning ammunition.

Prosecutors said Florea had applied to join the far-right Proud Boys group but was not yet a member at the time of his arrest because he had not attended the requisite number of meetings. They said Florea traveled to Washington in December and was with the group when it vandalized a church.

“He came back in a van full of people,” Florea’s wife told WPIX-TV. “He told me two of them were Proud Boys. He sold them to me as these patriotic people who loved their country.” 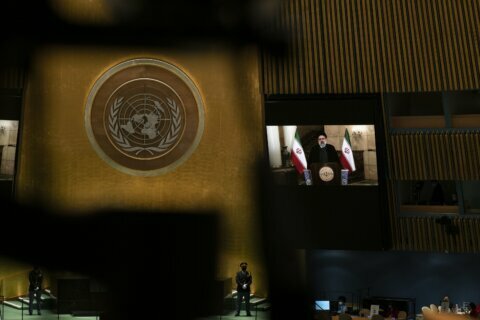