LOS ANGELES (AP) — A man who was stabbed when a Los Angeles protest against vaccine mandates turned violent has been released from the hospital, police said Sunday.

The man was stabbed and a news reporter was kicked after a fight broke out Saturday between anti-vaccination demonstrators and counterprotesters in front of LA City Hall.

The identity of the man with the stab wound was not released and no information was given about the extent of his injury, the Los Angeles Times reported.

No arrest has been reported in connection with the stabbing, or in the attack on KPCC radio reporter Frank Stoltze, said Officer Mike Lopez of the Los Angeles Police Department.

“Not wearing a mask and being anti-vax isn’t patriotism — it’s stupidity,” City Council President Nury Martinez said in a statement. “We have to be able to have differences of opinions without resorting to violence. Attacking counter-protesters and journalists has no place in a democracy and certainly no place in Los Angeles.”

After a fight broke out, the LAPD said on Twitter account that it was “aware of 1 male that was stabbed & is being treated.” The victim was rushed to a hospital.

Counterprotesters could be seen spraying Mace while members of the anti-vaccine rally screamed death threats, the Times reported.

At least one man was seen kicking Stoltze, who told a police officer he had been assaulted while trying to conduct an interview.

Stoltze later tweeted: “Something happened to me today that’s never happened in 30 yrs of reporting. In LA. ⁦@LAist. I was shoved, kicked and my eyeglasses were ripped off of my face by a group of guys at a protest – outside City Hall during an anti-vax Recall ⁦@GavinNewsom Pro Trump rally.”

Stoltze added that he is in good condition. 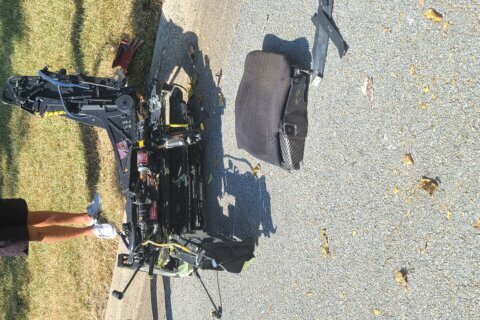