TOPEKA, Kan. (AP) — Kansas Rep. Sharice Davids tested positive Friday for COVID-19 despite being vaccinated against it and is in isolation at home.

Davids said in a statement that she has had only mild symptoms from her breakthrough case. She said she was tested after undergoing outpatient surgery involving the parathyroid glands in the neck that regulate calcium levels in the blood.

The two-term Democratic congresswoman for the state’s portion of the Kansas City metropolitan area said she’s been following precautions recommended by health officials, including wearing masks indoors, and her office said she’s back in her district. Davids said she’s grateful for COVID-19 vaccines and urged people to get inoculated.

“I know things could have been much worse for me without it,” she said in her statement. “We need everyone to get vaccinated in order to put the worst of this virus behind us.”

Davids’ statement did not say exactly how she became infected with COVID-19, or whether she has the delta variant. Recent analysis has shown that breakthrough cases of COVID-19, with mild or no symptoms, still remain rare.

Dozens of members of Congress have been infected, including GOP Rep. Jake LaTurner, who represents an eastern Kansas district.

Norman is part of a federal lawsuit against U.S. House Speaker Nancy Pelosi over a mandate earlier this year that members wear masks while on the House floor. The mask requirement was lifted June 11 but has since been revived because of a resurgence of the coronavirus.

Davids won Kansas’ seat in the 3rd Congressional District in 2018 by unseating four-term Republican Rep. Kevin Yoder in a heavily suburban district that turned against former President Donald Trump. She received national attention because she’s an LGBTQ Native American who previously fought mixed martial arts bouts. She is the only Democrat in the state’s congressional delegation. 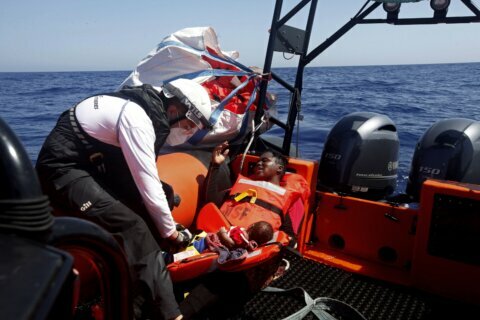