LOS ANGELES (AP) — Caitlyn Jenner kicked off a monthlong campaign tour Thursday in her bid to become California’s next governor and raised fresh questions about her motive for entering the contest.

The former Olympian and reality TV personality sidestepped questions about whether she had lined up any lucrative book or TV deals connected to the September recall election that could remove Democratic Gov. Gavin Newsom from office.

“I’ve never worked so hard for nothing in my life,” Jenner told reporters in Los Angeles’ Venice Beach neighborhood, after being asked about inking any money-making side ventures. She then steered around a second question about possible deals.

But later in the afternoon, her campaign issued a statement saying “she has not pursued any money-making ventures in connection with the campaign.”

Asked why she didn’t respond when asked about possible side deals in the works, the campaign said, “It’s not a question she was expecting.”

In her first run for office, Jenner has been shadowed by doubts about her intentions and whether she might be running a vanity campaign linked to advancing her entertainment career. She has no background in managing a vast government like California, by itself the world’s fifth-largest economy.

Those questions were fanned by the disclosure that she ducked out of the country after announcing her campaign to film a reality TV program in Australia, which Jenner has said was a previously arranged commitment.

Jenner, who came out as a transgender woman in 2015 and has millions of social media followers, also skipped what so far has been the only candidate debate on Aug. 4. She scratched a planned statewide bus tour, instead opting to fly to events, her campaign said.

Meanwhile Thursday, Newsom got a lift from President Joe Biden, who issued a statement urging Californians to oppose the Sept. 14 recall. Newsom “knows how to get the job done because he’s been doing it,” Biden said of his fellow Democrat. Biden and Vice President Kamala Harris, the former California senator, are expected to take active roles in the campaign.

Jenner’s candidacy has been unconventional from the start.

Her initial website was largely devoted to seeking donations and selling campaign swag, like hats, T-shirts and wine glasses carrying her name. It took her 77 days to hold her first news conference after announcing she would enter the contest.

Despite her name recognition, she continues to be little more than an asterisk in the polls, and recent fundraising reports revealed her campaign was effectively in debt.

Asked about Jenner, former congressman Doug Ose, one of her Republican rivals, said, “I am not yet clear whether this is a serious campaign or some sort of docudrama for the purpose of monetizing it after the fact.”

Another Republican in the race, real estate investor John Cox, said that “California has had its share of media candidates, and it’s about time they got a businessman.”

Until the start of her tour, the 71-year-old Jenner anchored her campaign to televised media interviews, which have included embarrassing stumbles that highlighted her inexperience, including acknowledging she wasn’t deeply versed in Newsom’s latest budget.

Jenner was in Venice to bring attention to the state’s homelessness crisis – residential streets in the seaside neighborhood in Los Angeles are crowded with soiled tents and makeshift shelters, and residents are in an uproar over filthy conditions, drug use, crime and the city’s inability to restore order.

The neighborhood once famous for its artistic community and boardwalk has fallen into “total anarchy,” said 21-year Venice resident Robin Nelson, a Republican who was sitting outside a gymnasium where tents for unhoused people were just steps away.

She’s turned off by Jenner’s past ties to former President Donald Trump.

“I don’t want anyone in office who thinks that kind divisiveness is acceptable,” she said, adding that Jenner “is not even on my radar.”

Nichole Cruz, a Democrat and voice-over artist who lives in nearby Marina del Rey, said she is not paying much attention to news about the election and has no qualms with Newsom. And to her, Jenner is little more than a name.

“I can’t say that there is much I know about her,” Cruz said.

Jenner blames the homeless crisis on the high cost of living, unemployment and a lack of affordable housing, combined with mental health and drug problems for many of those on the streets. She faults Newsom for creating an “industry” around homelessness, in which state funds go to nonprofits, which turn around and fund his campaigns.

Through much of her street tour, she was trailed by about 20 reporters, photographers and TV camera operators, underscoring the value of her celebrity appeal. She was hounded by a lone heckler, who urged her to visit a nearby homeless shelter. “It’s all image,” the heckler shouted at her.

Newsom, aided by a record budget surplus, has proposed spending $12 billion to get more people off the streets and into housing. 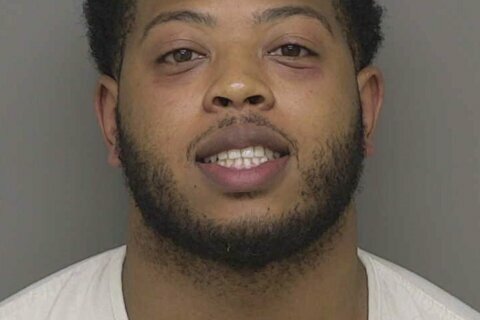