Coronavirus News: US sets stage for boosters | Importance of nuance when dealing with COVID | How 'dark winter' can be avoided | Latest cases in DC region
Home » National News » AP urges DeSantis to…

“You will ban the press secretary of a democratically-elected official while allowing the Taliban to live tweet their conquest of Afghanistan?” Pushaw said. She said those who “challenge false narratives are often silenced by corporate media and Big Tech collusion.”

Pushaw denied trying to direct the governor’s followers to target AP’s reporter despite retweeting his article and writing “drag them” in a now-deleted post.

She had objected to Tuesday’s story by AP’s Tallahassee, Florida-based reporter Brendan Farrington, which pointed out that one of DeSantis’ multimillion-dollar donors invests in a company making the COVID-19 treatment drug Regeneron. DeSantis has been touting the monoclonal antibody treatment throughout the state.

In another tweet, she wrote that if Farrington didn’t change the story, she would “put you on blast.” She also retweeted a message that said “Light. Them. Up.” in reference to the AP.

Early Wednesday, Farrington tweeted that he had received online threats and hate messages about the story. “For your sake, I hope government doesn’t threaten your safety. I’ll be fine, I hope. Freedom. Just please don’t kill me.”

Farrington declined to be interviewed for this story.

Brian Carovillano, AP’s vice president and managing editor, said Pushaw’s tweets were particularly egregious because she’s a public servant whose job it is to work with the press.

“There’s pushback, which we fully accept and is a regular facet of being a political reporter or any kind of reporter, and there’s harassment,” Carovillano said. “This is not pushback, it’s harassment. It’s bullying. It’s calling out the trolls at somebody who is just doing his job and it’s putting him and his family at risk.”

Pushaw said her “drag them” comment was social media slang and was not meant as a violent threat. She said she deleted it because she didn’t want it to be misinterpreted.

“As soon as Farrington told me he received threats, I tweeted that nobody should be threatening anyone, that is completely unacceptable,” she said. “I also urged him to report any threats to police.”

Viktorya Vilk, program director for digital safety and free expression at PEN America, said the Urban Dictionary defines “drag them” as to roast (make fun of/mock) someone very hard. Its use seems to imply or encourage people to go on the attack, in a way that’s just shy of being direct, Vilk said.

“The backlash he is receiving is a direct result of his and AP’s decision to cherry pick facts to prop up a false narrative, which sadly puts the lives of your readers at risk,” she said. “If people falsely believe Regeneron — a clinically proven lifesaving treatment — is part of a corruption scheme, they will hesitate to get it, and this causes harm.”

The AP said it stands by its story.

This past spring, DeSantis supporters objected to a “60 Minutes” story that pointed out DeSantis had received a $100,000 donation from the supermarket chain Publix, which the state was working with to distribute vaccine.

In her letter, Veerasingham asked DeSantis to assure the people of Florida “that there is no place” for Pushaw’s behavior in government. Veerasingham, AP’s vice president and chief operating officer, will become AP’s CEO in January.

Also this past spring, AP said it would study ways to more aggressively fight online harassment of journalists. This came after several AP reporters expressed concern in internal meetings about whether the organization would have its back if they came under online attack. 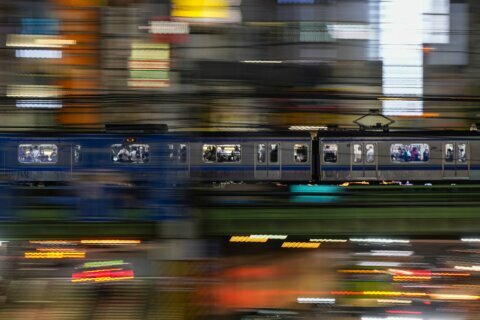