2 arrested in fatal shooting of New Orleans officer in Texas

HOUSTON (AP) — Two men have been arrested in the fatal shooting of an off-duty New Orleans police officer during a holdup while he was dining at a Houston restaurant, police said Friday.

Frederick D. Jackson, 19, and Anthony Rayshard Jenkins, 21, each have been charged with capital murder and attempted capital murder, Harris County District Attorney Kim Ogg said. Jail records do not list attorneys for them.

“We are very pleased and thankful for the quick arrests made by the Houston Police Department in connection with the murder of Everett Briscoe,” New Orleans Police Superintendent Shaun Ferguson said in a statement. “I want to thank Chief Troy Finner and this team for keeping us informed the whole way. As a man who dedicated his life to justice, Everett Briscoe will hopefully rest easier knowing individuals involved in his death will face theirs.”

Briscoe and Riculfy were dining on the patio of the Grotto Ristorante when two men wearing hoodies approached them and tried to rob them, police said. One or more of the suspects then fired at the victims, striking them both.

Patrons were cooperating with the gunmen, witnesses told police, until one of the suspects fired shots before they fled in a nearby vehicle. Police later identified Jackson and Jenkins as suspects. Jenkins was taken into custody on Wednesday and Jackson was arrested Thursday, police said.

Ogg said prosecutors were seeking no bond for Jackson and Jenkins. She said both men were free on bonds when the shooting happened.

Police said they are also looking for a third man who is considered a person of interest and is being sought for questioning.

Briscoe, a 13-year veteran of the New Orleans Police Department, was in Houston while vacationing with friends. Both Briscoe and Riculfy were members of the Zulu Social Aid & Pleasure Club and were taking the trip with club members, The Times-Picayune / The New Orleans Advocate reported.

Friends and family gathered at the Mahalia Jackson Theater on Friday for a public viewing of Briscoe, whose uniformed body lay in a casket surrounded by floral arrangements and wreaths in his memory with two officers standing guard. A funeral is scheduled Saturday at 11 a.m. at the Xavier University Convocation Center.

Briscoe’s death has led to an outpouring of sorrow among those who knew him. During a news conference earlier this week to discuss the case, a visibly distraught Police Superintendent Shaun Ferguson spoke about how Briscoe was planning to get a criminal justice degree at Southern University of New Orleans, in part to set an example for his eldest son about the value of education.

Briscoe leaves behind a wife and two children. 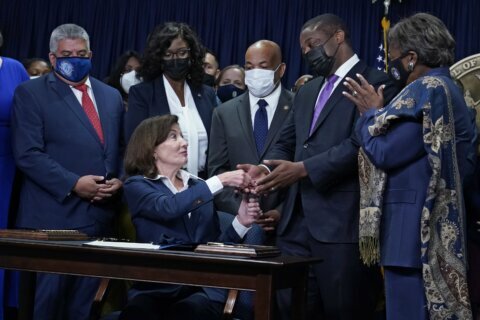