Lawmakers: Parental OK needed for minors to get COVID shot

NASHVILLE, Tenn. (AP) — Two Tennessee Republican lawmakers said Wednesday they received assurances that the state’s health agency won’t vaccinate minors for COVID-19 without parental consent, doubling back on a decades-old provision about children’s vaccination rights that was a lightning rod in the firing of the state’s top vaccine official.

The announcement came during a meeting of the same legislative panel that last month grilled Department of Health officials — among them, then-vaccine chief Michelle Fiscus. The state has since terminated Fiscus in what she contends was a move to appease some GOP lawmakers who fumed over state outreach for COVID-19 vaccinations to minors. Some even threatened to dissolve the Health Department.

Sen. Kerry Roberts and Rep. John Ragan, GOP co-chairs of the Joint Government Operations Committee, said in a statement read at Wednesday’s meeting that they had met with Health Commissioner Lisa Piercey and a member of Republican Gov. Bill Lee’s office. A spokesperson for the Department of Health did not immediately respond to a request for comment about the discussion.

According to the lawmakers, both administration officials confirmed during that meeting that it’s not the policy of the Department of Health, Department of Education or the 89 county health departments under the state’s direct control to give the COVID-19 vaccine to children without parental consent, Roberts read in the statement. Six larger counties, such as Nashville and Memphis’ Shelby County, are run independently.

The lawmakers did not say the change would limit medical providers outside the government.

The Republicans’ statement didn’t mention Fiscus, who has said the Health Department has stopped outreach for vaccinating minors for all diseases, not just COVID-19, which she has backed up through departmental email records. She has noted that she never said the children’s vaccines program had been halted. The Department of Health has recently directed parents to state websites for information on childhood vaccines.

Roberts and Ragan also sought to defend Republicans in the Legislature. They said they haven’t discouraged Tennesseans from being vaccinated or having their children vaccinated by opposing COVID-19 shots for minors without parental consent and criticizing the state’s marketing outreach on childhood vaccines. They claim the outreach targeted children, not parents.

“Interpreting these two concerns as being anti-vaxxers is intellectually dishonest, it’s lazy and it’s wrong,” Roberts said in the statement.

At issue is a memo sent by Fiscus about Tennessee’s Mature Minor Doctrine, which traces back to a 1987 state Supreme Court case and allows providers to vaccinate children 14 and up without a parent’s consent.

A Department of Health official’s recommendation to fire Fiscus claims she sent around “her own interpretation” of the doctrine. It also alleged deficiencies in her leadership, citing issues with staff.

Fiscus has said the letter she sent providers was verbatim from documents provided by the department’s chief legal counsel. She provided email records to back up the assertion. She also issued a point-by-point rebuttal to the alleged fire-able offenses and distributed years of positive performance reviews from her supervisor, including as early as last month when she was praised for her “strong leadership.”

Tennessee is one of five states where providers have discretion to decide if a minor is mature enough to consent to vaccination without a parent, according to the Kaiser Family Foundation, which said 41 other states require parental consent and five others have a self-consent age under 18.

At the June hearing, Piercey said she knew of only eight times this year when Tennessee’s doctrine was invoked, and three were for her own children, who received vaccines while she was at work.

Roberts and Ragan also blasted “anyone who is bullying, bribing, shaming, coercing or cajoling an individual into taking the vaccine.”

The two lawmakers listed what they called “unacceptable behavior,” though without providing proof that anything like those scenarios actually happened — demanding football players wear masks and test weekly at their own expense until they are vaccinated; suspending marching band members from the halftime show unless they get vaccinated; segregating vaccinated and unvaccinated children in school; or a county health department paying or incentivizing parents to vaccinate children.

Roberts did not allow discussion on the topic Wednesday, despite having Democrats on the panel who have opposed the state’s direction on vaccines and a handful of Fiscus’ supporters in the audience. Piercey was unable to attend the meeting due to a previously planned trip with her family, a spokesperson said.

Speaking to reporters, Rep. Vincent Dixie, the Democratic Caucus chairman, blasted Republican colleagues for closing off discussion and said they were using “figments of imagination” as examples. He said the methods that the Republicans decried were the ones they used against Fiscus.

“The same tactics that Sen. Roberts said about bullying, cajoling, ridiculing people, they used them against Dr. Piercey and Dr. Fiscus,” Dixie said. 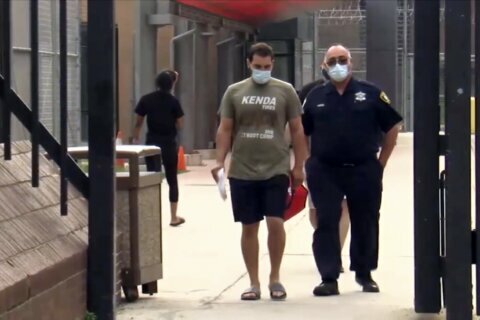