EASTERN MEDITERRANEAN SEA (AP) — Britain’s newest aircraft carrier, HMS Queen Elizabeth, is helping to take on the “lion’s share” of operations against the Islamic State group in Iraq, U.K. naval commanders said. It has also piqued the interest of Russian warplanes, who try to keep tabs on its cutting-edge F-35 jet in a “cat-and-mouse” game with British and U.S. pilots.

Speaking aboard the 65,000-ton carrier on its first-ever deployment, Commodore Steve Moorhouse said the U.K. is carrying out most of the missions to wipe out the remnants of IS in Iraq as the U.S. focuses on its withdrawal from Afghanistan.

“At the moment, we’re taking on the lion’s share of that operation over Iraq, which is a fantastic, say, feather in our cap. But an achievement that ‘A’, we’re trusted and ‘B’, that we’re able to do that,” Moorhouse told reporters Sunday.

It’s the first time that a U.K. aircraft carrier is supporting live military operations on the ground in over two decades, projecting British military power on a global scale. Moorhouse said the carrier offers the U.K. flexibility in how to conduct military operations abroad and “keeps those that wish to cause us harm … on their toes.”

He said the eastern Mediterranean has become more “congested and contested” over the last decade in light of the heavier Russian military presence in Syria, which is resulting in regular encounters with Russian ships and warplanes.

“We’re rubbing up against Russian activity, not in a you know, in a dangerous or aggressive manner, but you’ve just got other people out here playing in what is a fixed piece of water and airspace,” said Moorhouse, adding that a Russian warship has come within 10 kilometers (16 miles) of the carrier.

The commodore insisted that Russian, British and U.S. pilots have a “healthy respect for one another” and their conduct has been “absolutely professional” since the aircraft carrier started anti-IS operations on June 18.

“But there is a reality when you buy yourself a fifth-generation aircraft carrier and you take it around the world … people are interested in it,” he added.

Captain James Blackmore, who commands the eight British F-35 jets and the 10 helicopters aboard the carrier, said U.K. and Russian pilots have come within “visual distance” of each other.

“It’s that cat-and-mouse posturing, it’s what we expect in this region of world. And as you can imagine, it’s the first time for F-35s into the eastern Mediterranean,” said Blackmore. “So, of course Russia wants to look at what they’re like, they want to look at what our carriers are like.”

The state-of-the art F-35, armed with air-to-air missiles and laser-guided bombs, is being used over Iraq to look for other aircraft or unmanned drones, support troops on the ground as well as to carry out surveillance with its sophisticated sensor and radar systems.

“It’s a fifth-generation aircraft with a hugely, hugely capable radar and sensor suite, and that’s what it brings. So it’s the eyes and ears that it’s offering out there,” said Moorhouse.

The HMS Queen Elizabeth and its support ships, which include the U.S. destroyer The Sullivans, will remain in the eastern Mediterranean for two to three weeks before moving through the Suez Canal to continue with a 7 1/2 -month deployment to India, South Korea and Japan.

The carrier also has 10 U.S. F-35 jets from the Marine Corps’ Fighter Attack Squadron 211 aboard that carry out operations under British command. 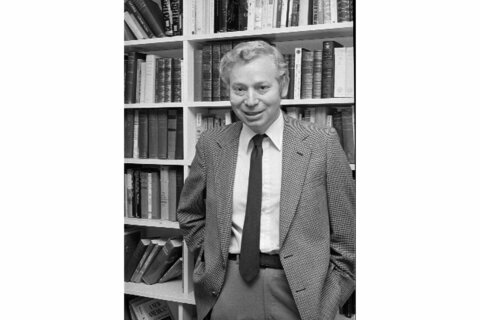