The U.S. Department of Health and Human Services, which cares for migrant children, said Wednesday that it did not intend to close any facilities but that it was “assessing” the Republican governor’s late Tuesday disaster declaration. The proclamation directs a state agency to deny or discontinue within 90 days licenses for child care facilities sheltering migrant children.

Groups that represent migrant children and reunite them with their families said the order could be harmful because it may mean more minors are sent to mass-scale, unlicensed facilities that attorneys and advocates say endanger their health and safety. Abbott argues that the federal government can’t force Texas to keep issuing state licenses in response to a federal problem.

The U.S. government funds 56 shelters in Texas, out of about 200 licensed shelters in the country. The last census taken on May 19 showed 4,223 children in 52 of those state-licensed shelters, according to the Texas Health and Human Services Commission.

The agency was directed to remove the licenses and sent a notice to providers Wednesday telling them to wind down operations by Aug. 30.

After that date, it says, “if you are still providing care for individuals who are not lawfully present in the United States under a contract with the federal government, HHSC will take necessary steps to comply with the proclamation.”

The highly unusual move to order a disaster declaration — usually reserved for natural disasters or health crises — comes amid Abbott’s criticism of record numbers of border crossings in recent months. He has increased the presence of the Texas Department of Public Safety and National Guard in south Texas.

Abbott also has been critical of emergency facilities that lack state licenses, which may end up taking in more children if his order succeeds in shuttering smaller shelters.

In April, Texas officials announced they were investigating three reports alleging abuse and neglect at a San Antonio coliseum holding more than 1,600 migrant teens. There also have been abuse or neglect investigations at state-licensed facilities, and Texas lists 18 total citations between April and May.

Some critics worry the disaster declaration could set a precedent for other Republican governors to thwart efforts by the Biden administration to increase capacity in a network of licensed shelters. Governors in Iowa and Nebraska have rejected federal requests to house migrant children, saying they oppose President Joe Biden’s stance on caring for minors before they are reunited with family in the U.S.

“This is a transparent and troubling ploy to politicize a humanitarian crisis,” Krish O’Mara Vignarajah, head of Lutheran Immigration and Refugee Service, said in a statement. “Because Texas-based shelters comprise a significant portion of U.S. capacity, this order could do real damage, and to the serious detriment of children’s well-being.”

The increasing arrival of migrant children has tested the Biden administration, with the U.S. government picking up nearly 19,000 children traveling alone across the Mexican border in March and more than 17,000 in April.

The record-setting numbers come as the administration decided to exempt unaccompanied children from federal pandemic-related powers to immediately expel most migrants from the country without giving them an opportunity to seek asylum.

The pandemic also has meant less capacity at small and medium-size shelters that care for minors. The program lost thousands of beds due to COVID-19 restrictions, bringing down the tally to about 7,100 by February.

With fewer beds in smaller shelters and growing numbers of children crowding U.S. Border Patrol stations, the Biden administration awarded huge contracts to private companies to set up unlicensed emergency facilities at convention centers, military bases and other large venues in March. These venues resemble hurricane evacuation shelters with little space to play and no privacy, and critics say the contractors are not equipped to adequately care for the minors.

Health and Human Services has refused access to news media once children are at the facilities, citing the pandemic and privacy restrictions. Advocates and lawmakers who have been allowed to visit have expressed concerns about children’s mental health at the sites where hundreds can sleep in cots in large tents. These facilities require fewer youth care workers and clinicians per child and no traditional legal oversight, skirting state regulations.

The Biden administration has maintained that the sites provide “lifesaving services” for children, with officials assuring lawmakers that minors would be kept in large-scale settings no more than two weeks, then placed with family in the U.S. or sent to a permanent licensed facility. But some children have been at the large venues much longer.

Doing away with more state-licensed shelters is a “wrongheaded approach,” said Wendy Young, president of Kids in Need of Defense, which provides legal services to immigrant children.

“At a time when the United States needs far more licensed placement settings for unaccompanied migrant children, the order threatens to leave the nation with far less,” Young said.

Gomez Licon reported from Miami. Coronado is a corps member for the Associated Press/Report for America Statehouse News Initiative. Report for America is a nonprofit national service program that places journalists in local newsrooms to report on undercovered issues. 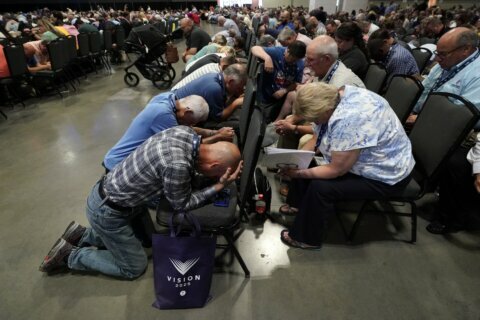