ATLANTA (AP) — Two police officers responding to reports of gunfire in one of Atlanta’s most famous neighborhoods were ambushed Wednesday, leaving one of them shot and wounded and a suspect dead, authorities said.

When the officers went into an apartment building in the city’s Midtown area to investigate, “they were immediately approached with gunfire” when the elevator door opened, Deputy Atlanta Police Chief Charles Hampton Jr. said.

The wounded officer was in stable condition at a hospital and talking to fellow officers and family members, Atlanta Police Chief Rodney Bryant said.

“It is only through their training and by the grace of God that these officers did not come upon a more tragic situation,” Bryant said.

A bystander reported hearing a barrage of shots and said he later saw an officer, bleeding badly while being rushed from the scene on Peachtree Street, a major thoroughfare in the bustling Midtown district.

Atlanta Mayor Keisha Lance Bottoms, speaking at the news conference with police officials, praised the officers for their swift actions.

“These officers were ambushed,” the mayor said.

Patrick Walker, who works as a concierge for the apartment building, told The Atlanta Journal-Constitution that he heard a barrage of shots.

Walker was at the building’s front desk when he heard the shots and saw police come running through the doors. Employees and others in the lobby tried to find safety, he said.

Walker then saw an officer being carried out by his arms and legs, “bleeding so bad,” he told the newspaper.

Authorities did not immediately identify the officer or the person who was fatally shot.

Anthony Crawford, a U.S. Army veteran, said he was at a nearby cafe when he heard what sounded like semi-automatic gunfire. His heart started racing.

“I just took off running,” he said.

He said he later saw the wounded officer taken out on a gurney with his face bandaged. He was sitting upright and responding.

“He looked like he was doing alright,” he said.

The shooting occurred in a prominent area of Atlanta about one block north of the iconic Fox Theatre and the Georgian Terrace Hotel, where cast members of “Gone With The Wind” stayed when the movie made its Atlanta premier.

Later Wednesday, Georgia Gov. Brian Kemp wrote on Twitter that he and his family “join all Georgians in praying for the Atlanta police officer who was shot in the line of duty today.”

“Georgia stands with the brave men and women who protect us every day,” Kemp added.

The Georgia Bureau of Investigation says it is investigating the shooting at the request of the Atlanta Police Department. No further details were immediately released. 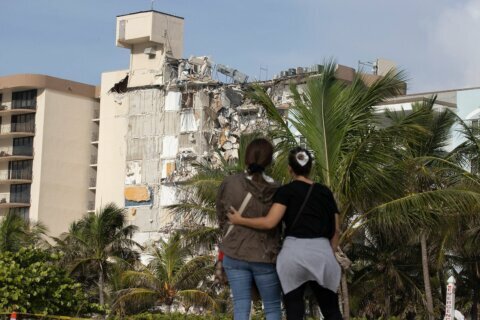