SALEM, Ore. (AP) — Legislators have brought guns into the Oregon State Capitol for personal protection. Protesters have carried semi-automatic rifles onto the grounds and into the building.

Later this year, doing so will be outlawed under a bill signed Tuesday by Gov. Kate Brown that was earlier passed by the Legislature, with Democrats in favor and minority Republicans opposed. The new law also mandates the safe storage of guns.

“Today, I am signing SB 554 with the hope that we can take another step forward to help spare more Oregon families from the grief of losing a loved one to gun violence,” Brown said on Twitter.

The bill was named for Cindy Yuille and Steve Forsyth, who were slain in a shooting at a Portland-area shopping mall in 2012 by a man who stole a friend’s AR-15 rifle. A third person was seriously wounded.

Among those who testified in favor of the measure was Paul Kemp, Forsyth’s brother-in-law.

Backers of the new law, which takes effect three months after the Legislature adjourns this summer, said it will prevent accidental shootings by children, suicides and mass shootings.

It requires that firearms be secured with a trigger or cable lock, in a locked container or gun room.

Opponents said a delay in accessing a firearm for self-defense could cost lives.

Jim Mischel, of Sheridan, Oregon, provided written testimony to lawmakers describing how his wife woke up when he was away one night in 1981. She heard a noise, went to investigate and saw a stranger in their home.

She tried to get a pistol that was in a locked gun box in the nightstand out but was unable to before the man got into the bedroom and threatened her with his gun, Mischel said.

“She has never recovered,” he said.

The bill also bans guns from the Oregon Capitol, changing a law that allowed concealed handgun licensees to bring firearms into the building.

In a related development, an interfaith movement plans to present signatures Wednesday to the staff of Oregon Secretary of State Shemia Fagan, a step in an attempt to get two initiative petitions onto the ballot.

The movement has gathered the signatures of 2,000 voters for each initiative petition and will hand deliver them to Fagan’s staff, said Pastor Mark Knutson of the Augustana Lutheran Church in Portland.

“We hope to get the go ahead by early fall, which will give us almost 10 months to get 140,000 signatures to … place them both on the November 2022 general election ballot,” Knutson said.

The debate over guns is being resurrected as the number of mass shootings climbs again in America, with increased efforts to ban assault rifles and large-capacity magazines.

In Colorado, a gun storage bill was signed into law on April by Gov. Jared Polis, who said: “It’s a sensible measure to help avoid immeasurable heartbreak.”

Colorado’s law creates the offense of unlawful storage of a firearm if a person stores a gun knowing that a juvenile could access it without permission or if a resident of the premises is ineligible to possess a firearm.

States that have passed laws requiring some level of firearms safe storage in past years include California, Connecticut and New York, Anderman said. Massachusetts is the only state that requires that all unattended firearms be stored with locking devices in place, according to Giffords. 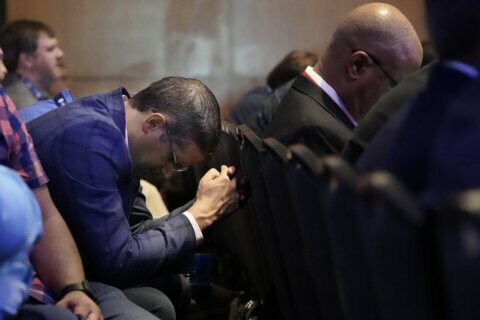