The head of the Vatican’s doctrine office is warning U.S. bishops to deliberate carefully and minimize divisions before proceeding with a possible plan to rebuke Roman Catholic politicians such as President Joe Biden for receiving Communion even though they support abortion rights.
Listen now to WTOP News WTOP.com | Alexa | Google Home | WTOP App | 103.5 FM

The head of the Vatican’s doctrine office is warning U.S. bishops to deliberate carefully and minimize divisions before proceeding with a possible plan to rebuke Roman Catholic politicians such as President Joe Biden for receiving Communion even though they support abortion rights.

The strong words of caution came in a letter from Cardinal Luis Ladaria, prefect of the Vatican’s Congregation for the Doctrine of the Faith, addressed to Archbishop José Gomez of Los Angeles, president of the U.S. Conference of Catholic Bishops. The USCCB will convene for a national meeting June 16, with plans to vote on drafting a document on the Communion issue

There is division among the bishops, with some pressing for Biden and other Catholic public figures to be excluded from Communion over their abortion stance, and other bishops warning that such a move would be politically polarizing.

Ladaria, in his letter, said any new policy “requires that dialogue occurs in two stages: first among the bishops themselves, and then between bishops and Catholic pro-choice politicians within their jurisdictions.”

Even then, Ladaria advised, the bishops should seek unanimous support within their ranks for any national policy, lest it become “a source of discord rather than unity within the episcopate and the larger church in the United States.”

Ladaria made several other points that could complicate the plans of bishops pressing for tough action:

— He said any new statement should not be limited to Catholic political leaders but broadened to encompass all churchgoing Catholics in regard to their worthiness to receive Communion.

— He questioned the USCCB policy identifying abortion as “the preeminent” moral issue, saying it would be misleading if any new document “were to give the impression that abortion and euthanasia alone constitute the only grave matters of Catholic moral and social teaching that demand the fullest accountability on the part of Catholics.”

— He said that if the U.S. bishops pursue a new policy, they should confer with bishops’ conferences in other countries “both to learn from one another and to preserve unity in the universal church.”

— He said any new policy could not override the authority of individual bishops to make decisions on who can receive Communion in their dioceses. Cardinal Wilton Gregory, the archbishop of Washington, D.C., has made clear that Biden is welcome to receive Communion at churches in the archdiocese.

Among the leaders of the campaign to rebuke Biden is Archbishop Salvatore Cordileone of San Francisco, who recently issued a pastoral letter arguing that Catholic politicians who support abortion rights should not receive Communion. A few days later, Bishop Robert McElroy of San Diego published an essay saying such an initiative “will bring tremendously destructive consequences.”

Ladaria’s letter was dated May 7. It was first reported Monday by Catholic News Service and the Jesuit magazine America. 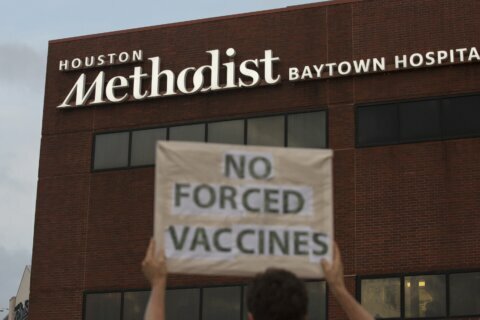