Man with neo-Nazi ties gets 3 years for bogus threats, calls

A former neo-Nazi leader was sentenced to more than 3 years in prison Tuesday for his role in a conspiracy to target a Black church, a Cabinet member and more than 100 others with bogus bomb threats and 911 calls.
Listen now to WTOP News WTOP.com | Alexa | Google Home | WTOP App | 103.5 FM

FALLS CHURCH, Va. (AP) — A former neo-Nazi leader was sentenced to more than 3 years in prison Tuesday for his role in a conspiracy to target a Black church, a Cabinet member and more than 100 others with bogus bomb threats and 911 calls.

The sentence was less than the 5-year term sought by prosecutors but more than the 18-month sentence sought by Denton’s attorney.

Denton’s lawyers argued at Tuesday’s sentencing that the conviction should not be considered a hate crime. While defense lawyer Andrew Stewart acknowledged that numerous swatting targets were chosen based on racial animus, he claimed Denton never did so. The only target Denton specifically selected was a ProPublica journalist who had exposed him as an Atomwaffen Division leader in a news article.

Those swatting calls targeted a ProPublica office in New York and the journalist’s home in Richmond, California. The journalist’s wife and child were home in February 2019 when police showed up in force in response to a bogus call from a man claiming he had killed his wife and would shoot any officers who responded to the home.

In court Tuesday, prosecutor Carina Cuellar said the raid prompted the couple’s child to ask, “Why do Nazis hate me because I’m brown?”

In court papers, the defense argued Denton was becoming disillusioned with Atomwaffen Division ideology and was trying to distance himself from the group at the time of his arrest last year, but that he found it difficult to do so because his roommate and many of his friends were group members.

Cuellar said at Tuesday’s hearing that she was “baffled” by the defense argument that the conduct should not be considered a hate crime. She said he knowingly participated in the swatting conspiracy, and that he can’t absolve himself by saying others chose the specific targets.

“He knew what was going on and that it furthered the mission of Atomwaffen Division and its hateful views,” she said.

And she rejected the notion that Denton was on the road to redemption at the time of his arrest. She noted that he told an undercover officer a month before his arrest that a raid and arrest would be good for Atomwaffen because it would increase its profile. She acknowledged that Denton may have exited from Atomwaffen Division, but that was only to pursue his own brand of white supremacy.

At Tuesday’s hearing, Denton, of Montgomery, Texas, offered a brief apology to his victims, to his family and to police officers who responded to the swatting calls. Judge O’Grady asked Denton about where he stands on his white-supremacist views and Denton responded that “I do not plan to go back to Atomwaffen Division or any groups like that.”

O’Grady, in handing down the sentence, said “I’m not convinced that you’ve changed your ways at all” but nevertheless gave a sentence below federal sentencing guidelines of 51 to 60 months. Below-guideline sentences are not at all uncommon. Denton has already served about 14 months in jail awaiting sentencing.

“These actions increase fear that people of color have that they will be targeted because of their color,” she said.

Among the targets was Alfred Street Baptist Church in Alexandria and the home of then-Homeland Security Secretary Kirstjen Nielsen, who also lives in Alexandria. The group also targeted the Dar El-Eman Islamic Center in Arlington, Texas, and a Black church in Schenectady, New York, the First Reformed Church.

Acting U.S. Attorney for the Eastern District of Virginia Raj Parekh, whose office prosecuted the case, issued a statement after the sentencing saying “the reprehensible conduct in this case terrorized communities across our Nation, as innocent Americans simply tried to attend school, practice their faith, and exercise their First Amendment rights. … This case sends an unmistakable message that those who target individuals because of their race, religion, or any other form of bias, will be identified, apprehended, and brought to justice.” 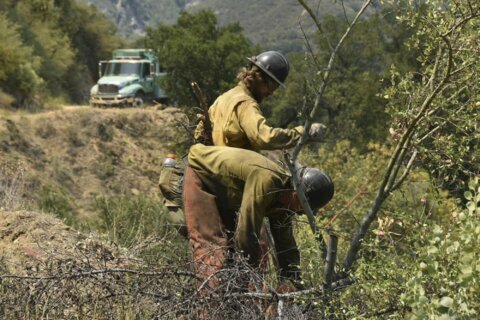