Explainer: What does new criminal inquiry mean for Trump?

NEW YORK (AP) — Donald Trump is facing a one-two punch of criminal investigations in New York, with the state attorney general’s office saying its ongoing civil inquiry into the former president and his businesses is now a criminal matter.

The attorney general’s office is conducting the probe, confirmed late Tuesday, in tandem with the Manhattan district attorney’s office, which has been scrutinizing Trump and his company, the Trump Organization, for about two years.

The DA’s office has been scouring Trump’s tax records, hired a former mafia prosecutor to help run its investigation and has been interviewing witnesses including Trump’s former personal lawyer, Michael Cohen.

So far, there’s no indication that charges are looming. Trump has continued to decry the whole thing as a “witch hunt.”

Here’s a look at where things stand:

WHO IS INVESTIGATING TRUMP?

New York Attorney General Letitia James and Manhattan District Attorney Cyrus Vance Jr., both Democrats, have been running parallel investigations into Trump and his businesses for more than two years.

Vance’s office has been investigating whether the Republican ex-president, his company or people connected to them committed crimes relating to matters including hush-money payments for women who say they slept with Trump, property valuations and employee compensation.

James’ probe began as a civil matter, looking at possible violations of state laws punishable with penalties such as fines, and centered on some of the same issues. Her investigation now also pertains to possible criminal conduct.

WHY IS THE AG’S PROBE NOW CRIMINAL?

James’ office said it recently informed the Trump Organization that its investigation into the company had expanded into a criminal matter. The attorney general’s office publicly disclosed the change Tuesday night.

“We have informed the Trump Organization that our investigation into the company is no longer purely civil in nature,” James’ office said in a statement.

“We are now actively investigating the Trump Organization in a criminal capacity, along with the Manhattan DA.”

James’ office offered no explanation for what prompted the shift in its approach to the investigation or why it chose to announce it publicly.

Andrew G. Celli Jr., a high-ranking official in the attorney general’s office from 1999 to 2003, said you don’t typically see a public announcement when an investigation changes from civil to criminal.

He said the statement could be an indication “something else public is coming soon,” or could be a way of “sending a message to witnesses and targets.”

Another possibility, not as dramatic, is someone else tipped off media outlets about the change and James’ office was compelled to respond publicly when asked about it.

“No doubt, there is some strategic or tactical reason for this announcement,” Celli said. “Statements like this have meaning. They don’t come out of nowhere.”

HOW DID TRUMP TAKE THE NEWS?

Trump issued a 900-word statement Wednesday filled with familiar complaints about the investigations and digs at Vance and James.

Trump complained that he’s being “unfairly attacked and abused by a corrupt political system” and contends the criminal probes are part of a Democratic plot to silence his voters and block him from running for president again.

Trump also repeated his oft-uttered claim that the investigations are “a continuation of the greatest political Witch Hunt in the history of the United States.”

“There is nothing more corrupt than an investigation that is in desperate search of a crime,” Trump said. “But, make no mistake, that is exactly what is happening here.”

WHAT ELSE ARE THEY INVESTIGATING?

Vance’s office has not publicly said what it is looking at, citing grand jury secrecy rules, but some details came out during the legal battle to get access to Trump’s tax records.

Vance’s investigation includes scrutiny of Trump’s relationship with his lenders; a land donation he made to qualify for an income tax deduction; and tax write-offs his company claimed on millions of dollars in consulting fees it paid.

Some of that money went to Trump’s daughter, Ivanka, who has denied any wrongdoing. In a tweet last November, she called the investigation “harassment pure and simple” and said it was “100% motivated by politics, publicity and rage.”

James’ office has also been looking at the land donation and scrutinizing records relating to a Trump office building in New York City, a hotel in Chicago and a golf course near Los Angeles.

Vance’s investigation has appeared to focus in recent weeks on Trump’s longtime finance chief, Allen Weisselberg. His former daughter-in-law, Jen Weisselberg, is cooperating with both inquiries. She’s given investigators reams of tax records and other documents as they look into whether some Trump employees were given off-the-books compensation, such as apartments or school tuition.

Trump’s son, Eric, was also subpoenaed as part of that probe and testified before the November 2020 election.

DOES THIS MEAN TRUMP WILL BE CHARGED?

James’ disclosure of a widening investigation is not necessarily an indication that she is planning to bring criminal charges.

If that were to happen, under state law, she’d need authorization from a county district attorney, like Vance, or the governor or a state agency.

Celli says it’s not unheard of that a civil investigation conducted by the attorney general’s office will turn up evidence of criminal wrongdoing.

In such cases, he said, attorney general’s office lawyers will sometimes be specially designated to work as criminal prosecutors with a local district attorney’s office.

More changes made to Boy Scouts of America bankruptcy plan 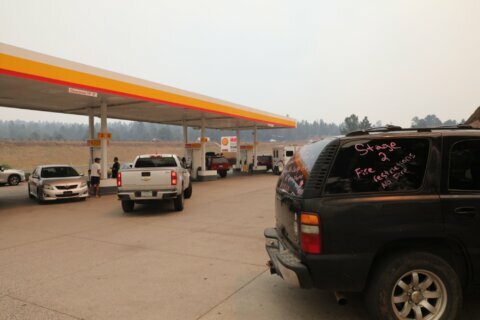 Arizona feeling brunt of wildfire activity across US West