Cop who rescued 4-year-old wounded in shooting speaks out

Officer Alyssa Vogel told CBS New York that her maternal instincts kicked in after she saw the child wounded by a bullet. The girl, who was going to a toy store with her family, was one of three innocent bystanders shot Saturday in Times Square.
Listen now to WTOP News WTOP.com | Alexa | Google Home | WTOP App | 103.5 FM

An NYPD officer is being hailed a hero after picking up a 4-year-old girl who was hurt in a triple shooting in Times Square and bringing her to safety. The nerve-racking moments were all caught on video.

Officer Alyssa Vogel, who is a mother to a 6-month-old boy, told CBS New York on Monday that her maternal instincts kicked in after she saw the child wounded by a bullet. The girl, who was going to a toy store with her family, was one of three innocent bystanders shot in Times Square on Saturday.

“I was just looking at her, saying if this was my kid, I would be running her myself to the hospital, or an ambulance,” Vogel said.

Video released by the NYPD showed the dramatic moments Vogel applied a tourniquet and later rushed her to a nearby ambulance.

“I had one on my gun belt, so I pulled it out, started putting it on her, tightening it,” Vogel said. “Obviously she’s a child, we didn’t know if it was going to be tight enough to work.”

While the kid’s parents were in shock, Vogel was amazed at how the youngster was handling the situation.

“She was amazing,” she said. “I can’t believe that a little girl her age who had just been shot was so calm. When I was with the mother, I was trying to calm her down, because obviously she was in a state… Just trying to get her to not have a panic attack, let her know it’s OK, your daughter’s OK.”

The child was in stable condition after having surgery.

The shooting at the iconic Manhattan destination comes as the city is trying to appeal for tourists to return to New York City.

Wendy Magrinat, another one of the victims, told CBS New York she was visiting Times Square from Rhode Island with her family.

“It was like one of the worst experiences of my life. And I was scared for my life,” Magrinat said.

Police have released a video of the shooting suspect they’re looking for. CBS New York reported that the alleged shooter is known to the NYPD for illegal vending in the Times Square area and the suspect’s brother was the intended target. 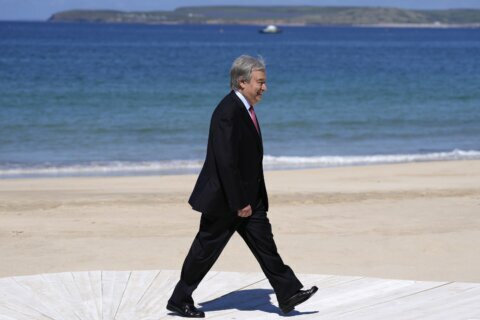