In the place now known as George Floyd Square, a spot that millions around the world have seen in videos shot by bystanders during Floyd's arrest, there was relief.
Listen now to WTOP News WTOP.com | Alexa | Google Home | WTOP App | 103.5 FM
(1/11) 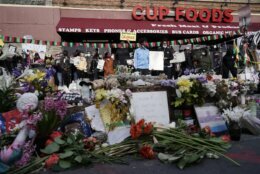 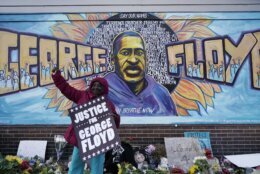 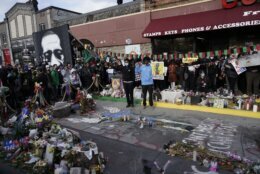 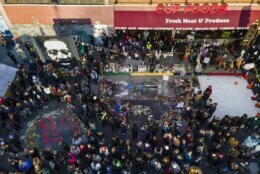 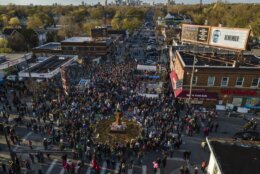 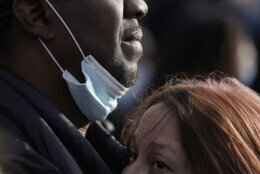 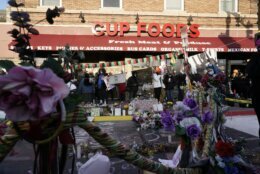 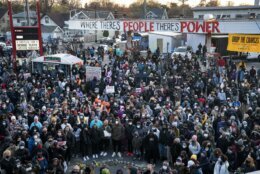 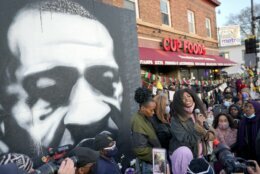 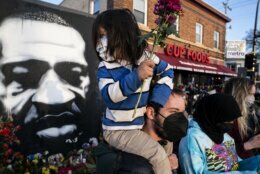 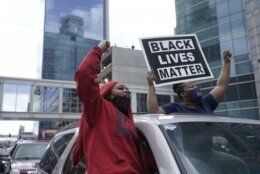 MINNEAPOLIS (AP) — There was quiet, just for a moment, as hundreds of people standing in the intersection at 38th Street and Chicago Avenue crowded in to listen to the news.

“They’re announcing the verdict!” someone shouted, calling for silence.

Then thunderous cheering filled the place where George Floyd was pinned beneath a police officer’s knee nearly a year ago, begging for air. Many people wept. Some sobbed.

They were cheering the first guilty verdict for the fired officer, Derek Chauvin, who was charged with murder and manslaughter. Moments later, another wave of cheers swept the crowd as the other two verdicts — both guilty — were announced. Moments after that, Chauvin put his hands behind his back and was led out of the courtroom in handcuffs.

In the place now known as George Floyd Square, a spot that millions around the world have seen in videos shot by bystanders during Floyd’s arrest, there was relief.

Venisha Johnson jumped for joy when she heard the verdicts. Minutes later she could barely speak, she was weeping so hard.

“It means so much to me,” said Johnson, who was wearing a mask that memorialized some of Floyd’s final words: “I can’t breathe.”

“I’ve been praying for George every day, every morning at 6 a.m. I’m just so happy. The way he was murdered was terrible, but thank you, Jesus,” she said.

Some 300 people gathered in the intersection, home to Cup Foods, the corner convenience store where employees had called police on the evening of May 25, saying Floyd had paid for cigarettes with a counterfeit $20 bill. It was Memorial Day.

Since then, thousands have come to lay flowers, poems, photos and letters at the site where Floyd had the air choked out of him. They came to stand beside the sculpture that now fills the middle of the street, a huge metal fist raised as a cry for justice. They came to look at the now-closed gas station, where the sign had been covered long ago with a demand: “Justice for George Floyd.”

On Tuesday, a protester climbed onto the sign to add two more words: “Justice Served,” with a question mark after them.

For those gathered on Tuesday, they had seen at least the beginning of justice.

By early evening, the square was a scene of celebration, prayer and community relief. More and more people streamed in. Someone played a tuba. There were occasional chants of “Say his name! George Floyd!” People danced to Tye Tribbett’s “We Gon’ Be Alright” and sang along to Notorious B.I.G.’s “Juicy,” throwing their arms around each other and raising their hands in the air.

Chris Gober, 17, brought his younger brother to talk about how Black men can face dangers from the police.

“Watch your back. Watch everything you do,” he told the 7-year-old. But Gober also said the verdict was “a start to a change” for a movement to racial justice.

Criminal convictions of police officers are exceedingly rare. There have been thousands of police shootings in the U.S. since 2005, but fewer than 140 officers have been charged with murder or manslaughter, according to criminologist Phil Stinson. Before Tuesday, only seven were convicted of murder.

Toni Hamilton, who brought her daughters to the intersection to hear the verdict, was deeply relieved at the news.

“I feel like for this whole time we’ve all been breathing with half of our breath,” she said. “Now there’s opportunity for the future. … There’s power when we all come together.”

It remains unclear what will happen to the square, which sprang up organically in the days after Floyd’s death, when community members put up homemade barricades to close it off. The city later replaced them with concrete barriers. It has been a place of pilgrimage and picnics, with people painting slogans and portraits on walls and the streets, leaving flowers and sometimes just hanging out and grilling hot dogs.

But neighborhood residents and entrepreneurs say the barricaded square led to a spike in crime and decimated businesses. City leaders have said they would reopen it after Chauvin’s trial, but the activists who serve as the square’s unofficial leaders say they will not step aside unless the city meets their long list of demands, including recalling the county prosecutor and firing the head of the state’s criminal investigative agency. Neither is likely to happen.

As the sun set over the square, Floyd’s aunt, Angela Harrelson, spoke to the crowd.

“When you came out to protect that site, to keep it sacred, you guys created a domino effect,” she said. “I don’t know all of your names, but I see you. I hear you. I appreciate you, and I won’t forget you.”

At one point on Tuesday, someone began throwing $1 bills in the air to symbolize the alleged counterfeit bill that led to Floyd’s death, and other people quickly followed. The money was soon collected in glass jars to become a donation — though it wasn’t really clear for what — and laid beside the flowers that now mark the spot where Floyd stopped breathing.

Eliza Wesley has been a near-constant presence at the square since Floyd’s death. She calls herself the Gatekeeper. Before the verdict was announced, she led the crowd in prayer.

“This is the day the Lord has made.”