Even after reviewing the posts in question, security officials across Capitol Hill were adamant on January 5 that they did not see any indication of a credible threat, according to the emails, which have not been previously reported.
Listen now to WTOP News WTOP.com | Alexa | Google Home | WTOP App | 103.5 FM

Newly revealed internal emails show an outside group warned Capitol security officials one day before the January 6 insurrection about a series of troubling social media posts calling for people to storm the US Capitol and kill federal employees, evidence that concerns about this kind of online chatter were raised in yet another way ahead of the attack but ultimately still dismissed at the time.

Even after reviewing the posts in question, security officials across Capitol Hill were adamant on January 5 that they did not see any indication of a credible threat, according to the emails, which have not been previously reported.

The emails also provide further insight, which extends beyond what has been learned through public testimony and internal reviews related to January 6, into what Capitol security officials knew, and ultimately chose not to act on, prior to the attack. And they raise questions about whether officials underestimated threat information that came from public sources — what is known in the intelligence community as open-source intelligence — in favor of information gathered by more clandestine methods.

New information about these warnings comes as President Joe Biden is set to deliver his first address to a joint session of Congress on Wednesday. It also follows a stunning milestone in the Capitol riot investigation, as the Justice Department has now charged at least 400 people in connection to the January 6 riot, according to CNN’s tally of court docs.

Internal communications show that Capitol security officers were contacted on the morning of January 5 by a representative from the artificial intelligence company Dataminr who flagged that its “First Alert” platform had detected several troubling posts, including one by an individual urging people to “go to Washington on Jan 6 and help storm the Capital.”

“We will storm government buildings, kill cops, kill security guards, kill federal employees and agents,” the 8kun post read, according to the email obtained by CNN.

Roughly three hours later, the same Dataminr representative followed up with Capitol security officers, alerting them to additional online chatter about storming the Capitol that was beginning to emerge on the social media platform Parler on January 5.

That message prompted an officer to notify the Capitol security command center but even after reviewing the posts, officials there were adamant that there was no indication of a credible threat, internal communications show.

“There is now chatter on Parler about storming the Capitol, please let me know if there are any updates to credible threats,” read an email from Valerie Hasberry, chief security officer for the Architect of the Capitol.

The Architect of the Capitol is part of the board that oversees US Capitol Police and helps provide security on Capitol Hill.

But after consulting with their supervisor, an on-duty officer responded to Hasberry’s email saying: “There is no talk about any credible threats or storming the Capitol.”

“[Watch Commander] Wisham said he would look through his emails and systems to make sure and if there is any information then he will forward it to us,” the officer added.

The Architect of the Capitol and US Capitol Police did not immediately respond to CNN’s requests for comment about the emails.

Why law enforcement turned a blind eye to concerns about these and other troubling social media posts ahead of January 6 remains a key line of inquiry for congressional investigators examining security failures around the attack, according to multiple sources familiar with the probes.

There are also lingering questions about the apparent lack of coordination between various security entities tasked with protecting the Capitol that day, a problem highlighted by another set of emails from January 5 obtained by CNN that show significant disagreement and frustration among relevant officials as late as 9 p.m. the night before the attack took place.

That disagreement centered on a request to remove roughly 500 bike racks at a location near the Senate side of the Capitol complex, according to an email sent by Hasberry at 9:10 p.m. to Architect of the Capitol Brett Blanton.

Hasberry noted that “the change was due to [Capitol Police’s] concern that demonstrators would be trapped” on an area of the lawn known as “the Eggs” outside the building. “This explanation did not track with past set ups,” she wrote.

According to the email, Capitol Police Assistant Chief Chad Thomas assured her the department’s Civil Disturbance Unit would be available “to quickly address problems,” but Hasberry said she believed there may be “other factors driving the change.”

Blanton called the change “illogical” and worried it removed “a zone of defense,” according to his response.

Together, the documents contribute to an already damning portrait of the intelligence failures ahead of January 6 and underscore concerns about how internal dysfunction among Capitol security forces may have contributed to a breakdown in planning.

Senate sources involved in one of the investigations admitted that even after months of hearings, interviews and document reviews, they have not identified a good answer as to why officials were seemingly unwilling to consider publicly available social media posts as legitimate intelligence sources but note they are “stunned” by the apparent breakdown.

That question still looms large in the minds of Senate and House investigators who continue to push forward with their broader probes into security failures around January 6. 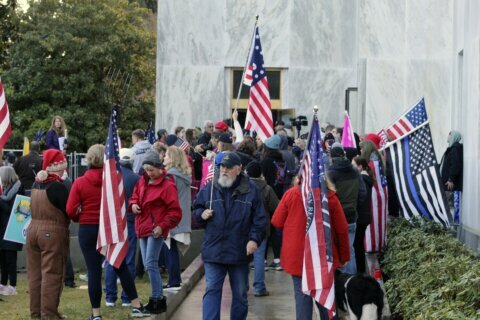