LOS ANGELES (AP) — Frances McDormand has two more Oscars. She may hang on to them a little more tightly.

She won best actress Sunday night for her performance in “Nomadland,” which also nabbed best picture. As a producer on the movie, she collected a trophy as well.

McDormand kissed her director-husband, Joel Coen, and rose from their table inside Union Station in downtown Los Angeles to make her way to the stage for one of the shortest speeches of the night.

“I have no words,” she said. “My voice is in my sword. We know the sword is our work and I like work. Thank you for knowing that and thanks for this.”

In “Nomadland,” McDormand plays Fern, who hits the road after the death of her husband and loss of her job at a plant that is shut down. She buys a van and seeks seasonal work, meeting fellow nomads and learning survival skills along the way.

“My happiest moment tonight is when Fran won,” said Chloé Zhao, who became the second woman and first of color to win directing honors.

Zhao credited McDormand for being “open and vulnerable” in helping her make the movie, as well as making the non-professional actors feel comfortable on set.

“She really is ‘Nomadland,’” Zhao said in the virtual media room.

McDormand did not talk to the virtual media, although she ducked in when Zhao and the other producers were talking, apparently to switch out trophies before leaving just as quickly.

McDormand made her biggest noise on stage after the movie won best picture. She tossed her head back and cut loose with a howl and yelps in honor of Michael Wolf Snyder. He was the sound mixer on the film who took his life at age 35. He was found in early March by his father, who said his son had suffered from depression for years. Snyder appeared in the show’s In Memoriam segment.

McDormand now has three best-actress Oscars. She won in 2018 for “Three Billboards Outside Ebbing, Missouri” and had her trophy briefly stolen during the post-show Governors Ball. It was quickly recovered. Her first Oscar came in 1996 for “Fargo.”

The 63-year-old actor won over front-runner Carey Mulligan of “Promising Young Woman” and Viola Davis of “Ma Rainey’s Black Bottom.” Andra Day of “The United States vs. Billie Holiday” and Vanessa Kirby of “Pieces of a Woman” were first-time nominees.

This story corrects the number of best actress wins by Frances McDormand. She has three. 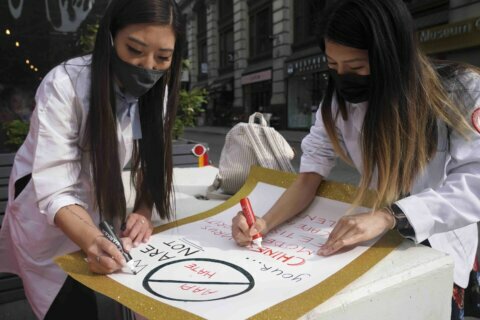