Colorado man to remain jailed after attack on US Capitol

DENVER (AP) — A federal judge in Washington, D.C., has denied bail for a Colorado geophysicist accused of dragging a police officer down steps to be beaten by an American flag outside the U.S. Capitol on Jan. 6.

Judge Emmet Sullivan ruled Wednesday that Jeffrey Sabol, 51, is a flight risk and could be a danger to the community if he were to be released. Sabol was ordered to be held pending a trial.

“To arm himself, he stripped a vulnerable police officer of his police baton. He then used that stolen police baton to force another officer away from his post and into a mob of rioters who proceeded to viciously attack him, leaving him bleeding from the head,” Sullivan wrote in the order.

After the attack, prosecutors said Sabol, who was born in Utica, New York, booked a flight from Boston Logan International Airport to Zurich, Switzerland, where he would not be able to be extradited to the U.S. He abandoned that plan and was arrested in New York after an apparent suicide attempt.

Sabol has been charged with multiple felony and misdemeanor counts stemming from the insurrection. Investigators say he told them he was trying to help the officer by “patting him on the back” and saying “we got you man.”

Sabol’s attorneys have argued for his release, noting that he does not have a criminal history, and he had steady employment and the support of family. They also said he now understands he was lied to about the 2020 election being stolen, and he was caught up in the frenzy of the crowd during the attack on the Capitol. 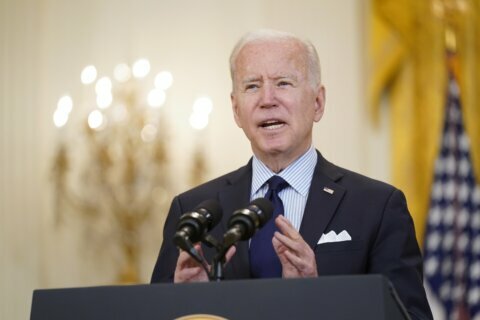