After a surge in violence against Asian Americans, thousands took part in protests across the country to raise awareness about racial discrimination that Asian Americans have experienced for decades, as organizers demanded legislative action to combat the issue.

Rallies were held across the country as a continuation of Friday’s “National Day of Action and Healing,” a movement to protest anti-Asian violence in the wake of the March 16 mass shooting at three Atlanta-area spas. Six women of Asian descent were among the eight people killed.

Maya King, a national politics report for Politico, told CBS News’ Lana Zak on Saturday that while the incident has not been formally classified as a hate crime, many activists and advocates say that the violent attack is representative of the significant anti-Asian rhetoric that has occurred over the past year amid the coronavirus pandemic.

Former President Donald Trump has regularly referred to the coronavirus as the “Chinese virus,” and a recent study showed that just one of his references to that phrase increased the use of anti-Asian hashtags on Twitter.

“Really what they’re calling for to rectify a lot of this from the past administration is a continuation of these kinds of policies that will call out a number of these wrongs,” King said.

According to Stop AAPI Hate, roughly 3,800 hate crimes against Asian Americans have been reported from March 2020 to April 2021.

Videos and photos of protests have flooded social media as people from Washington, D.C. to Los Angeles took part in the rallies.

One woman from Oregon tweeted how “almost every speaker” at the #StopAsianHate rally she attended Saturday is “experiencing fetishization from White men.” She said she has also experienced the issue since she was a teenager, as men have commented on her skin and breast size.

“They also said they prefer Asian women bc we are submissive, we take good care of our men, we are obedient,” she tweeted. This is part of reasons why most of my relationships ended bc I am none of those things. I will speak up, dominate, & break the rules. Stop fetishizing us. It’s a gross behavior & we are not disposable sex objects.”

Reporter Asia Tabb of CBS News affiliate WHP-TV tweeted videos of a demonstration in Lancaster, Pennsylvania, in which dozens could be heard chanting: “When they say more war, we say no more,” and “the people, united, will never be defeated.”

Many across the country are also touting support for the COVID-19 Hate Crimes Act. Senator Mazie Hirono tweeted on Friday that the bill, which has been introduce to the House, would require a designated employee from the Department of Justice to expedite the review of hate crimes and reports of crimes related to COVID-19. The bill would not only condemn acts of racism, Hirono said, but also would allow victims “to come forward safely without fear.”

Many Asian Americans and allies shared their own stories online.

Tennis superstar Naomi Osaka tweeted that many are willing to profit from and enjoy Asian culture, but do so while attacking Asian ethnic groups.

“If people loved Asian people as much as they love bubble tea, anime, mochi, sushi, matcha etc,” Osaka tweeted, adding, “Imagine profiting/enjoying things that come from a culture and then attacking/diminishing the ethnic group that created it.”

“My 5 yr old boy came home and asked me why bigger kid kept calling him Chinese Boy. My son, confused, told the boy I’m a New Jersey Boy,” Kim said. “He laughed it off but my eyes welled up. 50 yrs ago my parents immigrated here but we cannot shake shadow of foreignness.”

Kim said that although the incident may have been his son’s first experience with discrimination, it wasn’t the first time he’s heard bias toward his son.

“People told me he has cute slanty Chinese eyes or it’s great we teach him English as primary lang as if our default is foreigner,” Kim tweeted. “When someone joked about whether he was born knowing Kung Fu, it reminded me of the Jackie Chan taunts I got that started ‘innocent’ but then turned dangerous as I got older and found myself attacked by drunk men seeking to prove their strength by beating up ‘Jackie Chan.'”

Kim said he knew this wouldn’t be his son’s last time facing racism, and that other times will likely be worse, and potentially violent.

“As a Congressman, I sadly know there is no law I can pass that will protect him fully,” Kim said.

On Friday night, the National Council of Asian Pacific Americans held a virtual worldwide vigil in honor of the Asian American women killed in the Atlanta-area shootings.

President Joe Biden tweeted Friday that his administration “stands united with the Asian American community in the face of rising violence.”

Mr. Biden, who has urged Congress to pass the COVID-19 Hate Crimes Act, added, “Hate can have no safe harbor in America. It must stop — and it’s on all of us together to make it stop.” 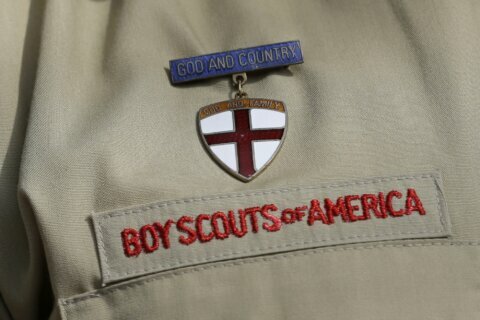 The Hartford agrees to pay $650M in Boy Scouts bankruptcy