Small Texas border town is route to US for migrant children

ROMA, Texas (AP) — As darkness sets on the Rio Grande, U.S. Border Patrol agents hear pumps inflating rafts across the river in Mexico. It is about to get busy.

Within an hour, about 100 people have been dropped off in the United States, including many families with toddlers and children as young as 7 traveling alone. All of them wear numbered yellow plastic wristbands that look like they could be used to get into a concert or amusement park, and everyone rips them off and tosses them on the ground after setting foot in the U.S. Large black letters on the wristbands read, “Entregas,” or “Deliveries,” apparently a mechanism for smugglers to keep track of migrants they are ferrying across the river that separates Texas and Mexico.

Roma, a town of 10,000 people with historic buildings and boarded-up storefronts in Texas’ Rio Grande Valley, is the latest epicenter of illegal crossings, where growing numbers of families and children are entering the United States to seek asylum.

U.S. authorities reported more than 100,000 encounters on the southern border in February, the highest since a four-month streak in 2019. Encounters have averaged about 5,000 people per day throughout March, which would be about a 50% increase over February if those figures hold for the entire month, according to a senior Border Patrol official, who spoke to reporters Friday on condition of anonymity to discuss preliminary figures.

More than 16,000 unaccompanied children were in government custody as of Thursday, including about 5,000 in substandard Customs and Border Protection facilities.

President Joe Biden, whom many migrants see as more welcoming than his predecessor, pushed back on suggestions that his administration’s immigration policies are responsible for the rising numbers. At his first news conference since taking office, Biden said Thursday that the government will take steps to more quickly move hundreds of migrant children and teenagers out of cramped detention facilities.

On the Rio Grande, a smuggler balked when a U.S. agent asks him to land downriver on a rare patch of sand, complaining that another agent punctured his raft days earlier. The agent reassures him and negotiates a landing away from gnarly branches.

“Children aboard,” another smuggler shouts to authorities.

As the rafts approached shore Wednesday night, smugglers jumped into the shallow water, lifted children and took the hands of adults lined up single file to get off the rafts. The migrants walked — or are carried — a few steps, and the smuggler turned around for the next passenger without touching dry land.

A 7-year-old girl named Kaylee fought back tears as she bemoaned leaving her phone in the raft. A smuggler tells her she didn’t, and she appears to shrug it off. Her mother’s U.S. phone number is written in black marker on the arm of her shirt.

U.S. agents escort groups of migrants about a half-mile over dirt roads to a dead-end street on the edge of Roma, where other agents at a white folding table examine identification documents, take names and destinations, and answer questions. Children traveling alone are separated from families, and people put their valuables in plastic bags.

From there, they head to a nearby parking lot and get into buses, vans and SUVs. Unaccompanied children are supposed to be held by CBP no more than 72 hours, but they are often held longer because U.S. Health and Human Services lacks space. The agency is housing children at the Dallas Convention Center and said it will open emergency facilities at venues or military bases in San Antonio, El Paso, San Diego and elsewhere.

The Biden administration expels nearly all single adults without an opportunity to seek asylum under a public health order issued at the start of the pandemic. They make up about 2,200 of the roughly 5,000 people encountered per day in March, the Border Patrol official said.

Of that total, about 450 to 500 are unaccompanied minors and the rest are families who are being allowed to stay, at least temporarily, if the children are under 7 and if they can’t immediately be returned to Mexico, which has reduced the number of families it will accept into shelters in the state of Tamaulipas, south of the Rio Grande Valley, the official said.

It’s not unusual to see increases in migrants crossing the border in the spring and summer, and the Border Patrol has faced similar situations in the past. But the official said the large numbers of teens and children and the pandemic-related space limitations have made this year especially difficult.

“The reason this is much different this year than it has been in previous years is one, we are faced with some unique challenges,” he said.

A group of Republican senators on Friday visited the Rio Grande Valley, which is the busiest corridor for illegal crossings, and toured a holding facility. Texas Sen. Ted Cruz blamed the Biden administration for the increasing numbers.

“The Biden administration is taking people who are testing positive for COVID-19 and locking them in cages side by side. This is inhumane,” Cruz told reporters. “It is wrong, and it is the direct consequence of policy decisions by the Biden administration to stop building the wall, to return, to catch and release and to end the stay in Mexico policy.”

In 2019, Central American migrants favored crossing in a nearby area of the Rio Grande Valley, but a wall built during Donald Trump’s presidency has pushed them closer to Roma, where the channel is relatively narrow but the current is brisk.

A 17-year-old from El Salvador said he left home recently because he felt threatened by gangs and believes Biden is sympathetic to migrants. Asked how he knew of Biden’s positions, he said, “people who talk.”

Maynor Cruz, 29, said Biden’s policies had nothing do with his decision to leave San Pedro Sula, Honduras, about two months ago, but he heard that families with young children were being allowed to remain in the United States.

Cruz said he was happy to be in the U.S. after a treacherous journey through Mexico, during which someone tried to kidnap his daughter. He left Honduras with his wife and children, ages 7 and 2, because he lost his job in a condiment factory when the pandemic struck and his home was destroyed by a tropical storm in November. He was able to raise enough money for the journey through family in the United States.

“It’s difficult to begin from zero (in Honduras) with what you earn there,” he said.

At the river, a lull set in after the initial rush. CBP reported that it took 681 unaccompanied children into custody Wednesday, a total that excludes Mexicans, who are typically returned immediately. 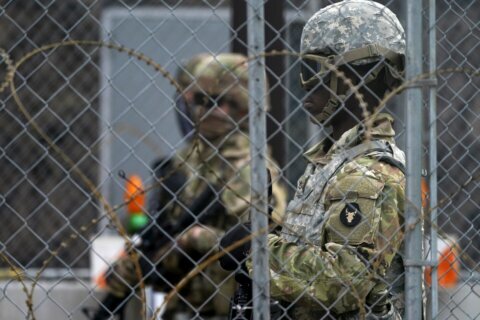