LOS ANGELES (AP) — Reactions from some of the nominees for the 93rd Academy Awards:

“I leaned into Sam Cooke’s signature confidence and signature swagger to make this believable. There were plenty of places that I felt like I might not measure up. But in those moments, I would reach for Sam’s confidence, because he knew how to measure up. There were times, there were moments that it felt like bringing him so close helped me find some of that magic in myself.” — Leslie Odom Jr., nominated for best supporting actor for his role as Sam Cooke in “One Night in Miami” and also for best original song, in an interview.

“When you hear your own name it’s a weird feeling, I just quietly gave thanks and felt some gratitude … but when I heard (names of fellow nominees including Paul Raci and Darius Marder) I was punching the air and jumping up and down in my bed and screaming! Everybody on this film was doing it because they wanted to push themselves and go farther than they have before. This was all of us trying to see how far could we go.” — Riz Ahmed, nominated for best actor for “Sound of Metal,” in an interview.

“Wow Wa We Waa! Thank you to the Academy for this honor! I really can’t believe this — to hear my name in the company of these remarkable women and their breathtaking performances is a dream come true! I am so grateful to Sacha Baron Cohen and my “Borat” family and congratulations to them for their adapted screenplay nomination.” — Maria Bakalova, nominated for best supporting actress for “Borat,” in a statement.

“As a writer this is hard for me to say but I’m beginning to think the performance of the cast may have something to do with the quality of the film. Showing up for work in the morning I felt like I was getting tossed the keys to a Formula One race car and as long as I didn’t put the car in the wall, these actors were going to win.” — Aaron Sorkin, director and screenwriter of “The Trial of the Chicago 7,” nominated in six categories including best picture, in an interview.

“As we were doing it I became aware of how rarely we see birth onscreen, yet it’s such a universal human experience. For that alone to be seen, let alone the subject we put onscreen … I learned really early on that one in four pregnancies ends in miscarriage, yet it’s never spoken about. So if this recognition means that the film gets seen and conversations start in even a few homes, I think that’s everything we could have wanted. — Vanessa Kirby, nominated for best actress for ”Pieces of a Woman,” in an interview.

“I recognize that our film stands on the success of ‘Black Panther,’ (co-producer) Ryan Coogler’s film. We wouldn’t have gotten this film made without his participation.” — Shaka King, nominated for best picture and best original screenplay for the film “Judas and the Black Messiah,” in an interview. He directed, co-produced and co-wrote the film, which earned six nominations and is the first best picture nominee with an all-Black producing team.

“Oh, no, never, ever even dreamt about it. No, it was just other side of the world, that story. So not to me.” — Yuh-Jung Youn, nominated for best supporting actress for “Minari,” said in an interview after arriving in Vancouver, Canada, and beginning a quarantine period.

“To be part of this historic year for the Academy, alongside so many exceptionally gifted filmmakers means more than I can possibly describe, and I’m particularly proud to be nominated beside the amazing Chloé Zhao. There have been so many exceptional female filmmakers this year, making such beautiful, inspiring, challenging, varied work, that I am truly honored and grateful to be among their number. — Emerald Fennell, nominated for best director and best original screenplay for “Promising Young Woman,” which also received nods for best picture and best actress, in a statement.

“I’m grateful to have gone on this journey with our talented team of filmmakers and to have met so many wonderful people who generously shared their stories with us. Thank you so much to my academy peers for recognizing this film that is very close to my heart.” — Zhao, in a statement.

“It was a complete surprise. We were in the middle of talking about something else because we, of course, never, ever saw that coming and that created more sort of a sense of ecstasy and and the element of celebration escalated drastically. … It’s midday here and I’ve already had my share of champagne, bubbles are good to start with. It accelerates things. And yes, I’ll have some drinks tonight.” — Thomas Vinterberg on his nomination for best director for “Another Round,” which was also nominated for best international feature film, in an interview.

“Everybody has been just embracing who I am and the things I have to say. That’s huge being a young 23-year-old Black woman. I’m just paving the way for those that will continue to fight along with me, and that will come after me for generations and generations to come.” —H.E.R., nominated for best original song for “Fight for You” from “Judas and the Black Messiah,” in an interview. On Sunday the singer won a Grammy for her protest anthem “I Can’t Breathe.”

“We spent years and years working away in an attic on the tip of Africa and being recognized by a global community like this is incredible. It’s hard to know why audiences have responded so strongly … but I think they are relating to parts of the story that are universal to almost every person on Earth — love and friendship and connection and hope.” — Pippa Ehrlich, co-director of nominated documentary feature “My Octopus Teacher,” in an email message.

“There’s kind of a moment when you see your movie appear that you were hoping for it but there it is, and you can’t believe it, and its an incredibly satisfying rewarding thing. This is the first time I have directed a feature so any kind of acknowledgment is really a wonderful honor… (Late screenwriter) Audrey Wells wrote a story knowing she would not live to see this movie, she put her heart and soul into this to communicate a message that was perfect for the world at this time … I am still amazed that I was given the opportunity to direct it.” — Glen Keane, director of “Over the Moon,” nominated for best animated feature, in an interview.

“For Tunisia it’s a historical moment. Tunisians needed the good news. So it was the news of the day and I’m very happy. — Kaouther Ban Hania, director of best international feature nominee “The Man Who Sold His Skin.” 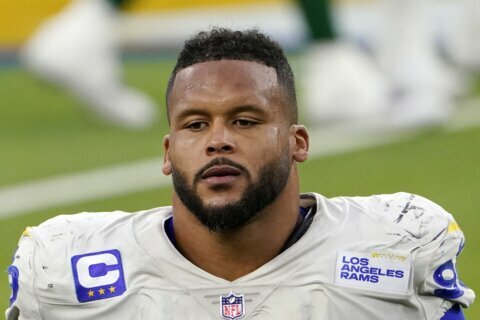