LOS ANGELES (AP) — There were royal victims and villains in Harry and Meghan’s tell-all — or tell enough — interview with Oprah Winfrey. But there was only one immediate and clear winner: the American media queen.

While the couple drew both strong support and rebukes for detailing why they fled Britain and their royal roles, Winfrey burnished her stature as a master interviewer with Sunday’s special that rivaled “The Crown”’ for drama and heartache.

She was in her element, breaking news and making entertainment. In past big “gets,” Winfrey had grilled Lance Armstrong about doping, Whitney Houston about her troubled life and Michael Jackson on whether he’d lightened his skin to deny his Blackness.

In those encounters, Winfrey played prosecutor or mother confessor. This time, she asked the couple holding hands in a manicured California garden to reveal the sins of a monarchy with 1,200 years of history.

The answers, including claims of palace bigotry and callousness that Meghan said put her on the brink of suicide, reverberated with U.S. viewers and in the U.K. even before the special’s planned airing there Monday night. Hugh Jackman recommended the “courageous interview” for its candor about mental health, and Serena Williams praised her friend Meghan for being “so brave.” The British tabloids that Meghan also blamed for her emotional pain feasted on the interview while labeling it self-serving.

Winfrey carefully framed the interview’s legitimacy at the outset, asking Meghan to confirm that questions hadn’t been provided in advance, no subject was off limits and the couple wasn’t compensated. CBS reportedly paid Winfrey’s production company, Harpo, up to $9 million to air it and, according to early Nielsen estimates, was rewarded with 17 million viewers, an unusually large audience amid multiplying choices.

“The thing that struck me first and I think will stay with me the longest is that she began the interview” with ethics-related disclosures, said Kathleen Bartzen Culver, director of the Center for Journalism Ethics at the University of Wisconsin-Madison. “That was such a fantastic way to be transparent about what we were going to see in that interview last night, and how we as viewers can judge its credibility.”

Winfrey also pointedly noted that she had attended the couple’s wedding — thanking Meghan for the invite — and that they were neighbors in the posh Montecito area of Southern California.

The veteran interviewer, actor and media mogul, whose talk show aired for more than two decades, had a willing partner in Meghan. Looking movie-star glamorous yet vulnerable in her visible pregnancy, the former “Suits” actor came prepared to “speak your truth today,” as Winfrey put it at one point.

When Meghan revealed the depth of her emotional distress, however, she stopped short of confirming that she considered suicide. Winfrey guided her toward that bleak revelation with a deftness honed by long experience.

Her questions were short and direct, including this memorable query to Meghan: “Were you silent, or silenced?” A careful listener, she let nothing escape her notice, including when Harry almost offhandedly mentioned that his father, Prince Charles, stopped taking his calls at some point. Winfrey coaxed Harry to explore the rift.

Other intimate details poured out, including what Meghan and Harry called a lack of palace support over Meghan’s harsh treatment by U.K. tabloids and dismaying accounts of how their son, Archie, was perceived as lesser than other royal offspring.

That included one of the interview’s bombshells from Meghan: That someone in the palace, whom the couple refused to identify, had speculated on how dark Meghan and Harry’s then-unborn son, Archie, would be.

“What? Hold up,” a shocked Winfrey replied, a potent exchange made more so because it involved two African American women with a shared perspective.

Bartzen Culver saw another value in Winfrey and her skillful performance.

“She is just so tremendously talented that it just sort of, in an unspoken way, undercut the racism” directed at Meghan, she said.

With the special fixed firmly on Harry and Meghan’s comments, there was scant room for context or clarification. That included the unanswered question of who had commented on Archie, a void that created a frenzy of speculation. It wasn’t until Monday morning, when Winfrey appeared on “CBS This Morning,” that viewers learned that Harry had disclosed that his grandparents, Queen Elizabeth II and Prince Philip, were in the clear.

In an almost defensive tone, Winfrey said she had pressed Harry for the person’s name during the edited interview that in all spanned more than three hours. She also explained the palace bureaucracy that dictates aspects of royal lives, aside from the wishes of the queen, something that U.S. viewers may be unfamiliar with.

John Doyle, television critic for Canada’s The Globe and Mail newspaper, said Winfrey was “the best kind of person” for the job.

While she is “a media superstar, incredibly rich and successful,” Doyle said, she’s able to view the British monarchy as a representative American who’s fascinated by it but “cannot quite understand all of the nuances and subtleties involved.

“I think she played that role and did it very well,” he said. 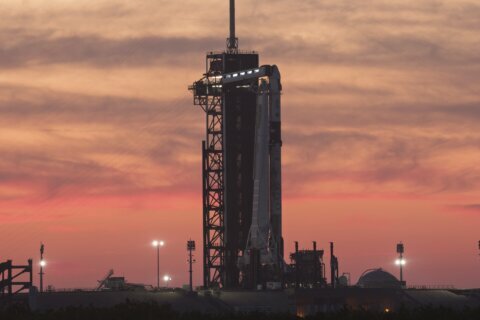