Officials name one of 3 men killed by San Diego driver

SAN DIEGO (AP) — A 40-year-old man named Rodney Diffendal was among three people killed when a driver plowed through a sidewalk homeless encampment downtown, according to a report released Wednesday.

The San Diego County Medical Examiner’s office did not release the names of the two others, ages 61 and 65, who died earlier this week in the crash that also injured six others.

Officials have said the names will be released once they notify the families of the men, which is taking time to track down because they were homeless. The men died of “multiple blunt force injuries,” according to the medical examiner’s report.

Police say the 71-year-old driver, Craig Voss, was impaired when he headed through a tunnel underneath a community college campus and drove his Volvo station wagon up on the sidewalk shortly after 9 a.m. Monday.

He faces three counts of vehicular manslaughter, five counts of causing great bodily harm and a felony DUI. It wasn’t immediately known if Voss had a lawyer who could speak on his behalf. No date has been set yet for his arraignment, and he remains in custody in lieu of $1 million bail.

Voss, who was arrested at the scene, did a field sobriety test by a drug recognition expert, though police have not identified whether Voss was under the influence of alcohol or another substance.

Candles and flowers have been placed on the sidewalk under the cement bridge. On its wall, people have written messages in chalk, including “RIP Rodny” and “You are loved, never forgotten.”

It was the second time in little over a month that a motorist in San Diego County killed people living on the streets. On Feb. 12, a teenage driver ran over two homeless men who died in Escondido, north of San Diego. 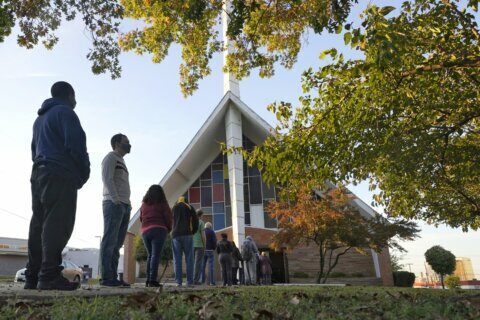