Man suspected of killing 4 in fight over stimulus check

INDIANAPOLIS (AP) — An Indianapolis man suspected of killing three adults and a child told police he fatally shot the four victims after he and his girlfriend argued because he wanted a share of her federal COVID-19 relief money, according to a court document and one of the girlfriend’s relatives.

Malik Halfacre, 25, was being held Tuesday at the Marion County Jail on four preliminary counts of murder and one count each of attempted murder and robbery. He has not yet been formally charged in Saturday’s shootings, which police have said occurred following a heated argument in a home where officers found the bodies of Anthony Johnson, 35, Dequan Moore, 23, Tomeeka Brown, 44, and 7-year-old Eve Moore. Halfacre’s girlfriend was critically wounded.

A probable cause affidavit filed Monday in Marion County Superior Court reveals more details about the argument. It says that Halfacre told officers following his arrest Sunday evening that he and his girlfriend — identified only as “J.M.” — “were arguing because he wanted some of her stimulus check.”

“Mr. Halfacre admitted to shooting all of the deceased individuals in the house. He also said that after everyone was shot, he took the money, J.M.’s purse, and her car and left the scene,” with his 6-month-old daughter, according to the affidavit.

The baby was later found unharmed at the home of Halfacre’s sister, according to the affidavit.

Wendy Johnson, a cousin of Halfacre’s girlfriend, told WXIN-TV that the day before the shootings Halfacre demanded half of his girlfriend’s $1,400 pandemic stimulus check, but her cousin refused.

“She had just got her money, and he wanted half of her money,” she told the station, citing what her cousin had said after the encounter. “She said, ‘No, you don’t deserve any of this. I work. I take care of our child. You don’t do anything.’”

Johnson said her cousin had offered Halfacre $450 of her stimulus check but that he replied, “I’m gonna get that money.”

Halfacre’s sister told officers that when her brother came to her home and dropped off the baby, he also “admitted to killing four people and told her details about how it happened,” the affidavit states.

Officers later found Halfacre in the attic of a friend’s home about 4.5 miles (7.2 kilometers) from the shooting scene, police said.

The Marion County Prosecutor’s Office is still investigating and does not expect to make a charging decision before Thursday, according to spokeswoman Destiny Burgos. 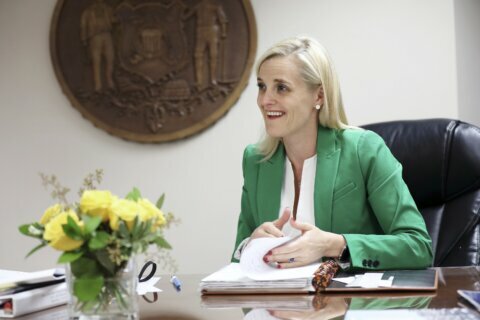