TULSA, Okla. (AP) — A man accused of being the getaway driver after the shootings of two Tulsa police officers, one of whom died, was sentenced to 24 years in prison.

A judge sentenced Matthew Hall on Monday, weeks after a jury convicted him on two counts of accessory to a felony in the June shootings of Tulsa Police Sgt. Craig Johnson and Officer Aurash Zarkeshan. Johnson died a day after the shooting, and Zarkeshan survived.

Hall was accused of driving David Anthony Ware from the scene after Ware allegedly shot the officers during a traffic stop on June 29.

District Judge William Musseman followed the jury’s recommendation in sentencing Hall to 12 years on each count, and he ordered the sentences to run consecutively.

“Two police officers serving the community found themselves on the street riddled with bullets,” Musseman said. “Hours later when he’s (Hall) caught by police, he continues to choose Ware,” referring to Hall’s initial statements distancing himself from the shootings.

Hall told authorities about the location of at least part of the weapon that was used, Musseman said. But he added that Hall only helped authorities based on his attorney’s advice.

Hall’s attorney, Brian Marin, unsuccessfully sought to have one of the counts dismissed, arguing the conduct in question constituted a single act. 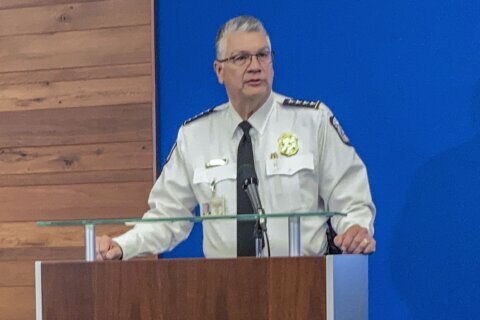