Acting U.S. Attorney Juan Antonio Gonzalez said in a news release that 37-year-old Drew Curtis Sikes of Palmetto Bay is charged with attempting to kill a U.S. officer and with a weapons crime.

A criminal complaint filed in Miami federal court says officers on Sunday responded initially to a call about an altercation between Sikes and his wife in the Mahogany Hammock section of the sprawling park. The FBI affidavit says the wife had visible marks and scrapes on her face.

As authorities searched for Sikes, they found his white van along an Everglades roadside but he was not there. The affidavit says Sikes then began shooting sporadically from a wooded area with the AK-47 near the park rangers as they talked to him over a loudspeaker, yelling things like “come get me,” and “I want you guys to kill me.”

Sikes later told authorities he fired the shots into the air and not at a specific official.

Eventually, Miami-Dade police arrived and took over negotiations for Sikes to surrender, which he did without incident after an hour. The rifle was left in the woods. Authorities say he fired about 50 rounds before giving up.

No one was seriously injured in the shooting.

Court records did not list an attorney for Sikes who could comment on his behalf. Sikes had an initial court appearance scheduled Tuesday. Prosecutors want him held without bail.

The FBI affidavit also says Sikes was charged earlier this month with a domestic violence charge of aggravated assault with a firearm involving his wife. A Miami-Dade County judge allowed his release on bond March 21 with an order that Sikes stay away from his wife.

The FBI affidavit says Sikes’ wife told rangers he had held her in captivity for days and that he was going to kill her.

The Associated Press does not typically identify victims of domestic abuse. 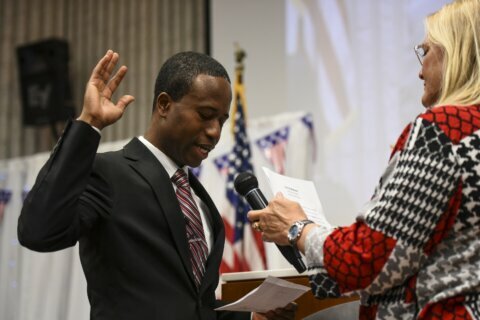