The yield on the 10-year Treasury climbed back above 1.50% Thursday, prodded higher by comments by the Federal Reserve’s chair, and it helped send stocks on Wall Street on another slide. The speed at which the yield has climbed has forced investors to re-examine how they value stocks, bonds and every other investment. And the immediate verdict has been to sell them at lower prices, particularly the most popular investments of the last year.

Yields have been climbing with optimism for an economic revival following a year of coronavirus-induced misery, along with expectations for the higher inflation that could accompany it. That’s key because those yields form the bedrock that the financial world uses to try to figure out the value for anything from Apple’s stock to a junk bond.

For years, yields have been ultralow for Treasurys, meaning investors earned very little in interest for owning them. That in turn made stocks and other investments more attractive, driving up their prices. But when Treasury yields rise, so does the downward pressure on prices for other investments. Here’s a look at why the recent moves have been so rocky:

WHY ARE TREASURY YIELDS RISING?

Part of it is rising expectations for inflation, perhaps the worst enemy of a bond investor. Inflation means future payments from bonds won’t buy as much – because the price of a banana or a bouquet of flowers will be higher than it is today. So when inflation expectations rise, bonds are less desirable, and their prices fall. That pushes up their yield.

Treasury yields also often track with expectations for the economy’s strength, which are on the rise. When the economy is healthy, investors feel less need to own Treasurys, considered to be the safest possible investment.

Say I bought a bond for $100 that pays 1% in interest, but I’m worried about rising inflation and don’t want to be stuck with it. I sell it to you for $90. You’re getting more than a 1% return on your investment, because the regular payouts coming from the bond will still be the same amount as when I owned it.

WHY ARE INFLATION AND GROWTH EXPECTATIONS RISING?

A stronger economy often coincides with higher inflation, though it’s been generally trending downward for decades. Congress is also close to pumping another $1.9 trillion into the U.S. economy, which could further boost growth and inflation.

WHY DO RATES AFFECT STOCK PRICES?

When trying to figure out what a stock’s price should be, investors often look at two things: how much cash the company will make and how much to pay for each $1 of that cash. When interest rates are low and bonds are paying little, investors are willing to pay more for that second part. They’re not losing out on much income if they had put that money in a Treasury instead.

AND NOW THAT RATES ARE RISING?

The recent rise in yields is forcing investors to pare back how much they’re willing to spend on each $1 of future company earnings. That’s prompting hard questions, particularly when critics had already been arguing stocks were approaching dangerous levels after their prices raced higher much, much faster than profits.

Stocks with the highest prices relative to earnings are getting hit hard, as are stocks that have been bid up for their expected profits far in the future. Big Tech stocks are in both those camps. Dividend-paying stocks also get hurt because investors looking for income can now turn instead to bonds, which are safer investments.

The ultimate worry is that inflation will take off at some point, sending rates much higher.

Ma thinks it could keep rising above 2% by the end of the year, but he doesn’t see it going back to the old normal of 4% or 5%, which would force an even bigger reassessment for markets. Until that becomes more clear, though, he says he’s looking for the stock market to stay volatile.

Yes. Despite the recent pullback in the market, the major U.S. stock indexes all remain near all-time highs set within the last month. The S&P 500 is still within 4.2% of its record set on Feb. 12.

HASN’T THE FED SAID IT WILL KEEP INTEREST RATES LOW?

Yes. The Federal Reserve has direct control over short-term interest rates, and Chair Jerome Powell has repeatedly said it’s in no hurry to raise them. It’s also not planning to trim its $120 billion in monthly bond purchases used to put downward pressure on longer-term rates.

Powell said the Fed won’t raise its benchmark interest rate, now at its record low of zero to 0.25%, until inflation runs slightly above its 2% target level. Powell has also repeatedly said that while price increases might accelerate in coming months, those increases are expected to be temporary and not a sign of long-run inflation threats.

He echoed those statements again on Thursday, but analysts said longer-term yields rose on disappointment that Powell didn’t offer something more forceful to tamp down the recent increases.

“We think our current policy stance is appropriate,” Powell said.

Yes, much of Wall Street still expects stocks to keep rising. One reason is that many investors agree with Powell and expect inflation pressures to be only temporary. That should hopefully keep rates from spiking to dangerous levels.

Also, after a dismal 2020 for most companies, investors are banking that growth in corporate profits will explode higher as more people get COVID-19 vaccines through the year and the economy gradually approaches something close to normal. If earnings rise enough, stocks can stay stable or maybe even go higher, despite a rise in rates..

DO SOME COMPANIES DO WELL WHEN RATES ARE RISING?

Financial companies, particularly banks, have gained recently because rising rates can mean bigger profits made on a variety of consumer loans, including mortgages. And if rates are rising on inflation worries, energy companies could benefit if prices are also rising for oil and other commodities.

Overall, though, rising interest rates are a drag on companies because they make borrowing more expensive. This is especially painful for companies like real estate investment trusts, or REITs, which require a lot of money, and often debt, to operate.

People who rely heavily on credit may also cut back, which could have a ripple effect on all kinds of companies that rely on consumer spending. 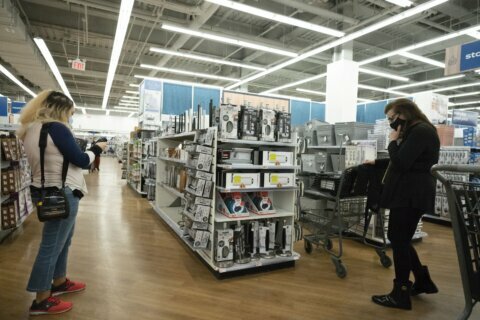