President Joe Biden’s $1.9 trillion COVID-19 relief package is being hailed by Democrats and progressive policy advocates as a generational expansion of the social safety net, providing food and housing assistance, greater access to health care and direct aid to families in what amounts to a broad-based attack on the cycle of poverty.
Listen now to WTOP News WTOP.com | Alexa | Google Home | WTOP App | 103.5 FM

WASHINGTON (AP) — President Joe Biden’s $1.9 trillion COVID-19 relief package is being hailed by Democrats and progressive policy advocates as a generational expansion of the social safety net, providing food and housing assistance, greater access to health care and direct aid to families in what amounts to a broad-based attack on the cycle of poverty.

With more than $6 billion for food security-related programs, more than $25 billion in emergency rental assistance, nearly $10 billion in emergency mortgage aid for homeowners, and extensions of already-expanded unemployment payments through early September, the package is full of provisions designed to help families and individuals survive and recover from pandemic-induced economic hardships.

“When you stand back and look at it, that’s when you really can appreciate the sheer scope of it,” said Ellen Vollinger, legal director for the Food Research & Action Center, a food-security advocacy group. “The scope is both impressive and much needed.”

Biden himself, when signing the package into law Thursday, referenced it as an overt attempt to redraw the country’s economic fault lines in a way that’s bigger than the pandemic. “This historic legislation is about rebuilding the backbone of this country and giving people in this nation, working people and middle-class folks, the people who built the country — a fighting chance,” Biden said.

And House Speaker Nancy Pelosi, D-Calif., called it “one of the most transformative and historic bills any of us will ever have the opportunity to support.”

Perry in particular pointed to the expansion of the child tax credit system as a potentially foundational change. The legislation provides families with up to $3,600 this year for each child and also expands the credit to millions of families currently making too little to qualify for the full benefits.

“That is really going to put a dent in child poverty,” Perry said.

In promoting the child tax credit expansion, Democrats rallied around an analysis that predicted it would cut nationwide child poverty by 45%.

The package also includes what amounts to the biggest expansion of federal help for health insurance since the Obama-era Affordable Care Act more than 10 years ago. Several million people could see their health insurance costs reduced, and there’s also an incentive for states to expand Medicaid coverage, if they haven’t already done so.

Those changes, however, won’t be as immediate as the direct cash injections in other areas.

Housing advocates give generally positive reviews, saying the massive relief packages for both renters and home owners should be enough to stave off the debts incurred so far. “This is an appropriate response for an unprecedented time. Clearly there’s a tremendous need to avoid an eviction tsunami,” said Diane Yentel, president of the National Low Income Housing Coalition.

But she also warned that the economic hardships, and need for assistance, will extend past the end of the pandemic.

“Many of the jobs that low-income workers have lost won’t come back right away,” she said.

Yentel called on Biden to extend the national moratorium on evictions via executive order. The current moratorium, imposed by the Centers for Disease Control as part of the national health emergency, is being challenged in multiple court cases and expires at the end of March.

Many of the legislation’s changes are temporary, but advocates and Democratic legislators are talking openly about making some of them permanent.

“Getting something out of the code is often times harder than getting something into the code,” House Ways and Means Committee Chairman Richard Neal, D-Mass., told reporters Tuesday, referring to the relief bill’s expansion of the child tax credit.

He added, “What we did is unlikely to go away.”

At this point, the child tax credit expansion would expire at the end of the year without some sort of congressional intervention. But permanently enshrining those changes into law could be a battle. Congress’ nonpartisan Joint Committee on Taxation has estimated the child tax credit’s cost at $110 billion, making it one of the single most expensive items in the whole package. Extending that over multiple years would be extremely costly, and would likely draw serious opposition, especially from Republicans.

Senate Minority Leader Mitch McConnell, R-Ky, called Democrats’ expansion of those credits “sweeping new government benefits with no work requirements whatsoever,” suggesting the shape of the GOP opposition strategy ahead. But the provision is projected to lift millions of families out of poverty, and progressives believe there will be tremendous pressure on Republicans to allow the change.

Many also want to preserve the bill’s temporarily beefed up earned income tax credit, and its improved tax breaks for caring for children and dependents and for paid sick and family leave.

A study by the Tax Policy Center concluded that the relief package would reduce federal taxes in 2021 by an average of $3,000 per household. Low- and moderate-income households (making $91,000 or less) would receive nearly 70 percent of the tax benefits, the study concluded.

“The question will be do they want child poverty to go back up again” by letting that credit expire, said Steve Wamhoff, director of federal tax policy for the liberal Institute on Taxation and Economic Policy. 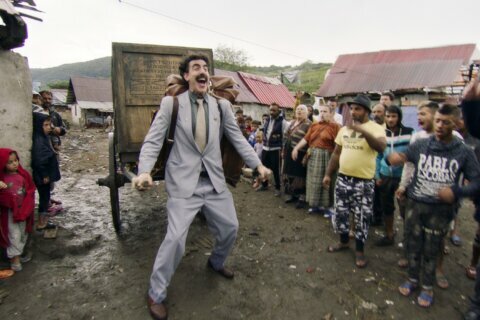 The gonzo art of writing for ‘Borat Subsequent Moviefilm’