LINCOLN, Neb. (AP) — The Biden administration’s plan to funnel more coronavirus aid into states with greater unemployment has irked governors with lower jobless rates, even though many have economies that weren’t hit as hard by the pandemic.

The $1.9 trillion relief bill working its way through Congress allocates extra money to larger, mostly Democratic-run states with higher unemployment rates, while rural Midwestern and Southern states that tend to have Republican governors and better jobless numbers would benefit less.

“You’re penalizing people who have done the right thing,” said Nebraska Gov. Pete Ricketts, a Republican whose state has reported the nation’s lowest unemployment rate over the last several months. “That’s not the way you want to approach any sort of government program.”

Ricketts was one of 22 governors — 21 Republicans and one Democrat — who have criticized the change in the pandemic relief proposal. Under previous coronavirus packages signed by former President Donald Trump, aid was distributed by population. If the new funding formula is approved, states including California, New York and New Jersey would each see a boost of more than $2 billion, while Iowa, Missouri, Nebraska and Ohio would all see aid reductions greater than $500 million. Georgia and Florida would see losses of more than $1.2 billion.

Many of the Republican-led states have taken a more hands-off approach to the pandemic to try to keep businesses open, while Democratic states argued that tighter mandates were necessary to save lives and help their economies over the long term.

The White House defended President Joe Biden’s distribution plan, saying it targets money to areas where it will have the biggest impact.

“President Biden’s rescue plan is focused on quickly getting help to the people and communities that need it most,” said Michael Gwin, director of White House rapid response.

Iowa State University economist David Swenson said the White House’s approach makes some sense because the states with the highest unemployment rates are generally the ones that relied more on industries battered by the pandemic, such as tourism.

“If proportionally more people are unemployed in Las Vegas and California and other places that are entertainment destinations, then it would make sense to send money to those places instead of Iowa and Nebraska,” Swenson said.

Critics argued that many of the hardest-hit states had higher jobless rates even before the pandemic began.

“Some states just have naturally lower unemployment rates,” said Ernie Goss, an economist at Creighton University in Omaha. “That’s one of the problems with doing it that way.”

Goss said it might make more sense to distribute aid to states that saw the biggest increases in unemployment during the pandemic. But he cautioned that the unemployment rate is still an incomplete measure of any state’s economy, because it doesn’t count people who have stopped looking for work.

Ohio Republican Lt. Gov. Jon Husted said his state’s jobless rate is likely unreliable because of massive unemployment fraud. He said Ohio has made multiple efforts to return people to work safely, but the new funding formula would cost his state about $800 million in federal aid.

Iowa Gov. Kim Reynolds, a Republican, said the funding formula “punishes states that took a measured approach to the pandemic and entered the crisis with healthy state budgets and strong economies.”

Arkansas Gov. Asa Hutchinson, a Republican who vice chairs the National Governors Association, last month raised concerns about using unemployment when he and other governors met with Biden.

“That’s really a disincentive for economic growth and people working,” Hutchinson told The Associated Press after the meeting. 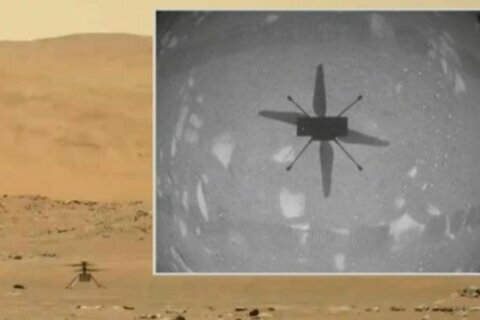