PHOENIX (AP) — Ava Arpaio, the wife of the former longtime sheriff of metro Phoenix who faithfully supported her husband in his controversial political career yet still managed to be liked by some of his toughest critics, has died at age 89.

Her death Sunday at a hospital in the Phoenix area was confirmed by her husband, former Sheriff Joe Arpaio. She died from complications of cancer.

Arpaio has credited his wife of 63 years for raising their two children while he worked as a federal drug agent in the United States, Turkey and Mexico and supporting him as he served as sheriff for 24 years and became an influential but polarizing figure in immigration enforcement.

“I look back and always say the job came first. Most people would never say that,” the 88-year-old former lawman said Monday. “I love my family, but I was dedicated to my job. And she put up with that and supported me.”

Ava Arpaio, who met Joe Arpaio on a blind date when he was a police officer in Washington, walked onto political stages with her husband, rode alongside him in parades and stumped for him in TV ads. She was a soft-spoken, affable foil to his hard-boiled image — he faced withering criticism about his jail and immigration policies, investigations of political foes and criminal contempt conviction, which former President Donald Trump pardoned.

She also opened a travel business in 1980 where her husband worked after he retired as a federal drug agent but before he was elected sheriff.

About five years ago, Ava Arpaio survived a bout of stomach cancer. While the cancer was in remission, she spent several days in an intensive care unit in 2019 after a rattlesnake that was in the couple’s garage came into the house and bit her. She recovered from the bite, but her cancer returned and spread.

She was a subtle truth speaker who would talk her husband out of making bad decisions, not by having long policy arguments but by listening and interjecting powerful bits of advice, Willems said, such as telling him he should worry less about criticism in news coverage and remember he worked for the people.

“She never saw herself as a political consultant, but she had that sharp, common-sense instinct about her,” Willems said. “And she knew her husband inside and out.”

Lydia Guzman, a Latino civil rights advocate and longtime Arpaio critic, said Ava Arpaio had a way of disarming her husband’s worst critics. Guzman recalled a booking signing where people who wanted to say nasty things to her husband found it hard to attack when the woman standing next to him was pleasant and had such an innocent smile.

“She was the PR Arpaio needed, not his regular PR,” Guzman said.

Knowing long ago that her husband had no hobbies and wasn’t going to have a conventional retirement, Ava Arpaio set up an office for him in their hometown of Fountain Hills, a Phoenix suburb, after he was voted out of the sheriff’s office in 2016. She had it ready to move in shortly after his loss.

When Joe Arpaio made unsuccessful comeback attempts she supported him. In a 2019 interview with The Associated Press, she said her husband had her blessing to seek what became a failed bid for a seventh term as sheriff.

“He loves his work and would like to get back into it,” Ava Arpaio said. “That’s all he has done his whole life.” 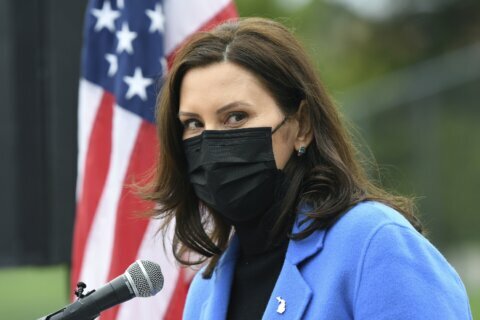