UNITED NATIONS (AP) — British Prime Minister Boris Johnson warned world leaders Tuesday that climate change is a threat to security of all nations and sharply criticized people across the globe who say this is “green stuff from a bunch of tree-hugging, tofu-munchers and not suited to international diplomacy and international politics.”

He pointed to the 16 million people displaced by weather-related disasters each year, some becoming easy prey to violent extremists, farmers losing another wheat harvest because of drought and switching to growing opium poppies, and girls forced to drop out of school to search for water becoming prey to human traffickers. He also cited the impacts of changing sea levels and wildfires.

“Whether you like it or not, it is a matter of when, not if, your country and your people will have to deal with these security impacts of climate change,” he warned leaders at a high-level Security Council meeting on climate-related risks to international peace and security.

Chairing the meeting of the U.N.’s most powerful body during the United Kingdom’s presidency this month, Johnson urged the council to demonstrate leadership to protect global peace, security and stability.

John Kerry, the U.S. special presidential envoy for climate, thanked European nations for stepping up to tackle climate change during the “inexcusable absence” of the United States during the previous administration.

Former President Donald Trump pulled the United States out of the landmark 2015 Paris climate agreement aimed at curbing greenhouse gas emissions that cause global warming. The world has already warmed 1.2 degrees Celsius (2.2 degrees Fahrenheit) since the mid-19th century and the goal now is to prevent an additional 0.3 degrees Celsius (0.5 degrees Fahrenheit) warming from now.

Kerry said President Joe Biden knows there is “not a moment to waste” and his administration aims to put the United States on a route to cutting fossil fuel emissions in a way that is, “and I emphasize, irreversible by any president, by any demagogue in the future.”

That appeared to be one of the most explicit assurances from the Biden administration that foreign countries should go ahead and make deals with the administration on climate despite fears that Trump or one of his populist “America First” supporters will take power again in 2024.

Kerry called the climate crisis “indisputably a Security Council issue,” saying the Pentagon has described it as “a threat multiplier.” But even though climate change has been repeatedly called “an existential threat,” he said, “we honestly have yet as a world to respond with the urgency required.”

He called the U.N. climate conference that Britain is hosting in Glasgow in November “literally our last best hope to get on track and get this right.” Nations are expected at the conference to come up with more ambitious pollution cuts.

Saying he was “very happy” to see the United States back at the table, France’s President Emmanuel Macron warned that “a failure on climate would undermine efforts to prevent conflicts and consolidate peace.”

He called on U.N. Secretary-General Antonio Guterres to appoint a U.N. envoy for climate security, who would be required to report annually, saying “what is at stake is our health, our lives and the stability of our planet.”

China’s special envoy for climate change, Xie Zhenhua, echoed that “climate change has become a pressing and serious threat to the survival, development and security of humankind.”

“The country met its 2020 targets ahead of schedule,” Xie said, adding that “China now has the largest number of new energy vehicles in the world.”

China and Russia have repeatedly objected to the Security Council discussing climate change.

Xie called it “a development issue” and Russia’s U.N. Ambassador Vassily Nebenzia, who welcomed the U.S. return to the Paris climate agreement, said it should be discussed in other U.N. bodies.

“We agree that climate change and environmental issues can exacerbate conflict, but are they really the root cause of these conflicts?” Nebenzia asked. “There are serious doubts about this.”

Reflecting Moscow’s opposition to council involvement, Nebenzia was the only U.N. ambassador to join presidents, prime ministers, other ministers and climate envoys in speaking.

U.S. envoy Kerry countered opponents of council involvement, calling the climate threat “so massive, so multifaceted,” and warning: “We bury our heads in the sand at our own peril. It is time to start treating the climate crisis like the urgent security threat that it is.”

Kenya’s President Uhuru Kenyatta stressed the impact of climate and security on Africa, which he lamented “unfortunately will suffer the worst consequences of climate change despite being the least responsible for global greenhouse gases.”

He said the drought-stricken Horn of Africa, drying of the Lake Chad basin, shrinking of the Sahel and savannah grasslands “and worsening economic vulnerabilities have set in motion political, demographic, migratory dynamics that increase the threat of insurgency and violent extremism.”

Secretary-General Guterres said “much more needs to be done” and urged a greater focus on reaching the Paris goals, saying “we look to the major emitters to lead by example in the coming months.”’

The U.N. chief called for a dramatic increase in investments to protect countries, communities and people “from increasingly frequent and severe climate impacts,” a scaling up of early warning systems, and addressing the poverty, lack of food and displacement caused by climate disruptions that contribute to conflict.

Renowned British broadcaster and naturalist David Attenborough, in a video message played just before Johnson officially opened the meeting, warned that “if we continue on our current path, we will face the collapse of everything that bring us our security” including good, water, habitable temperatures and food from the oceans.

“We have left the stable and secure climatic period that gave birth to our civilization,” he said. “There is no going back.”

But Attenborough said “if we act fast enough we can reach a new stable state” and the U.N. conference in November “may be our last opportunity to make this step change.”

Ellen Knickmeyer and Seth Borenstein in Washington and Sylvie Corbet in Paris contributed to this report. 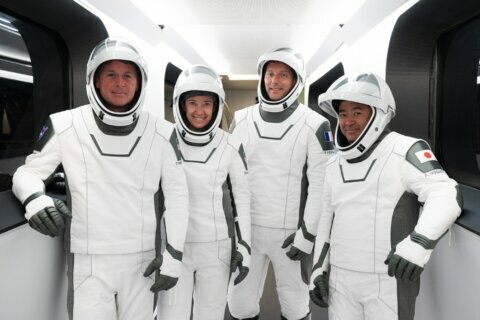