In its second day in the Northeast, a snow storm left nearly 15 inches (38 centimeters) of snow piled up in parts of New Hampshire. The snow changed over to sleet in areas of Maine and New Hampshire, adding to the misery of removal.

Snow is expected to continue in Vermont and Maine until Wednesday morning.

Skiers rejoiced as heavy snow fell in the region’s mountains. Off the Maine coast, the storm whipped up waves that approached 30 feet (9 meters), and a 73-mph (117-kph) gust was recorded at an offshore buoy.

HARTFORD, Conn. — Some COVID-19 vaccination sites in Connecticut remained closed or delayed their openings Tuesday as cleanup from the winter storm continued.

The Yale New Haven Health system, which runs several hospitals in southern Connecticut, said its vaccination sites were closed Tuesday and staff were contacting people to reschedule appointments. The system’s COVID-19 testing sites were set to reopen at noon.

The state’s largest vaccination site near the University of Connecticut football stadium in East Hartford also delayed its reopening to noon Tuesday. Hartford HealthCare kept its vaccination and testing sites open as scheduled Monday and Tuesday.

The storm, which dumped up to 19 inches (48 centimeters) of snow in some parts of the state, forced the cancellations of 10,000 vaccination appointments on Monday, state officials said. Efforts are under way to provide vaccinations by the end of the week to people whose appointments were canceled.

“Many providers said they were planning on extended hours and reaching out to individuals directly for rescheduling,” said Max Reiss, a spokesperson for Gov. Ned Lamont.

NEW YORK — New York City officials said people whose vaccination appointments were canceled because of the storm are being contacted individually for rescheduling.

“Our commitment is that we don’t make new appointments for people until we’ve taken care of all of the people who have to be rescheduled,” said Dr. Mitchell Katz, head of the city’s public hospital system, who joined Mayor Bill de Blasio at a virtual briefing on Tuesday.

HARRISBURG, Pa. — Pennsylvania Gov. Tom Wolf has declared a disaster emergency as that state’s residents begin digging out from the storm.

Wolf’s proclamation frees up millions of dollars for snow removal and other expenses associated with the massive, slow-moving storm, which dumped feet of snow on swaths of eastern Pennsylvania. It also authorizes state emergency management officials to request help from the National Guard.

Commercial vehicles remain banned on portions of interstates 80, 84 and 380, while restrictions remain in place on several other major roadways in eastern Pennsylvania.

HARTFORD, Conn. — Danbury racked up 19 inches (48 centimeters) in snowfall from the multiday storm, with other towns in the southern part of Connecticut not far behind, according to the National Weather Service.

Bridgeport and New Haven both got about 15 inches (38 centimeters) of snow, while parts of the Hartford area received about a foot or a little more.

Gov. Ned Lamont canceled a tractor-trailer ban on state highways at 6 a.m. Tuesday and delayed the opening of state offices to 10 a.m. to allow for cleanup efforts.

“The storm appears to be winding down and our state and local road crews have been out all night to clear the roads,” Lamont said in a statement.

In New England, nearly 15 inches (38 centimeters) of snow piled up in southeast New Hampshire, and the mountains were getting heavy snow as well.

The snow continued falling in Maine and won’t exit the northern part of the state until Wednesday morning, said meteorologist Michael Clair from the National Weather Service.

Several areas of Massachusetts were hit with more than 18 inches (46 centimeters) of snow, including the central Massachusetts communities of Fitchburg, Lunenburg and Ashburnham.

Other isolated places with 18-plus inches were North Andover and Wilmington, the National Weather Service reported. Chepachet, a village in Glocester, took the prize in Rhode Island with 13 inches (33 centimeters).

“For the next couple of weeks, the conditions are going to be phenomenal” for winter sports, Gov. Chris Sununu said Tuesday during an interview on WZID-FM.

TRENTON, N.J. — New Jersey residents spent Groundhog Day repeatedly plowing and shoveling after a winter storm left as much as 30 inches (76 centimeters) of snow in the northern part of the state.

A state of emergency imposed Sunday by Gov. Phil Murphy remained in effect and state government offices were closed for nonessential personnel.

The National Weather Service reported 30 inches of snow fell in parts of Sussex and Morris counties on Monday.

The New Jersey State Police reported as of 7 p.m. Monday, troopers had responded to 661 crashes and aided 1,050 motorists since 6 p.m. Sunday.

There was also concern about coastal flooding due to the storm. In a video posted on Facebook by Union Beach Police, Keyport Police Chief Shannon Torres and Capt. Michael Ferm were shown rescuing a man from floodwaters who was showing signs of hypothermia in his car.

This story corrects the spelling of Glocester, the village in Rhode Island. A previous version misspelled it as Gloucester. 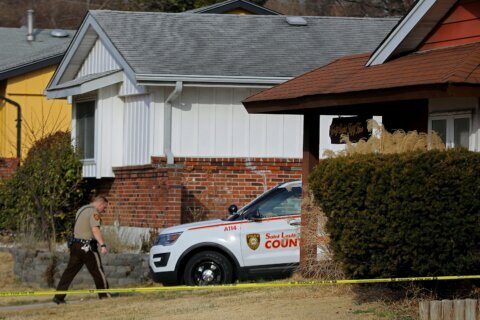