APPLETON, Wis. (AP) — Prosecutors have charged a teenager who is still on the run in a fatal shooting at…
Listen now to WTOP News WTOP.com | Alexa | Google Home | WTOP App | 103.5 FM

APPLETON, Wis. (AP) — Prosecutors have charged a teenager who is still on the run in a fatal shooting at a mall in eastern Wisconsin.

According to a criminal complaint filed in Outagamie County Circuit Court Tuesday, 17-year-old Dezman Ellis and the man who died, 19-year-old Jovanni Frausto, were at the Fox River Mall in the Appleton suburb of Grand Chute with friends Sunday afternoon and had a chance encounter, WLUK-TV reported.

Ellis was with his girlfriend who used to date Frausto, the complaint said. Their friends told police that an argument began between Ellis and Frausto and that they were threatening to beat each other up, prosecutors said.

At one point, witnesses told investigators Ellis told Frausto to “back up, back up. I’ll shoot this place up. I’ll kill you,” the complaint said.

Prosecutors said Ellis pulled out a gun and shot Frausto, who was wounded in his chest, arm and back. He was pronounced dead at the hospital. A bystander, 20-year-old Colt Lemmers, was also struck by gunfire, was treated for an injury to his hip and released from the hospital.

A car connected to the shooting was found outside a home in Oshkosh on Monday. Four people inside the home were arrested on disorderly conduct charges, but police did not find Ellis there. The four have since been released.

Law enforcement officers continue to look for Ellis and say he is likely armed and should not be approached.

It was the second recent mall shooting in Wisconsin. In November, eight people were injured in a shooting after a confrontation at a mall in Wauwatosa, in suburban Milwaukee. A 15-year-old boy was arrested and charged.

Grand Chute is a town of about 22,000 people on the outskirts of Appleton, about 100 miles (160 kilometers) north of Milwaukee. 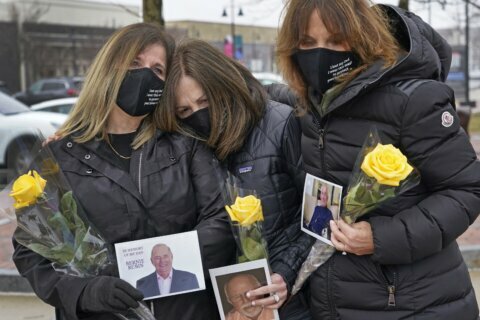