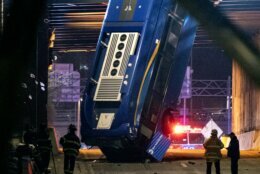 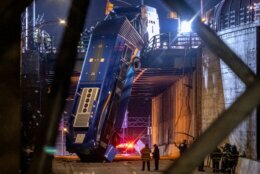 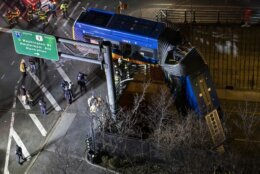 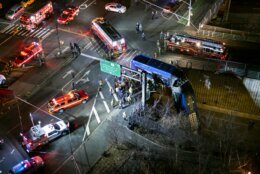 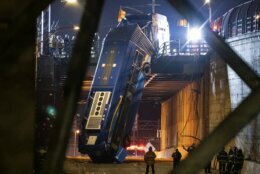 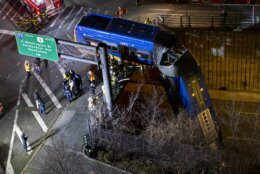 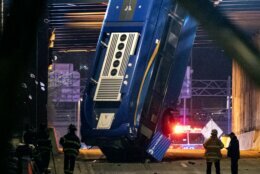 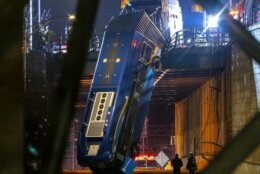 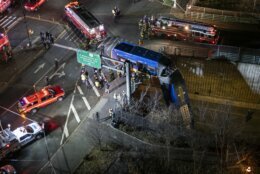 NEW YORK (AP) — A bus dramatically plunged off a bridge in New York City late Thursday, leaving its front half hanging over a highway ramp, its fall broken only by the road below.

The 55-year-old driver broke his jaw in the crash and refused to submit to a drug and alcohol test after arriving at the hospital, authorities said Friday.

Seven passengers suffered minor injuries in the crash, which happened after 11 p.m. near an interchange of the Cross Bronx and Major Deegan expressways. They were taken to hospitals. No other vehicles were involved.

One part of the articulated bus — essentially two buses connected by a pivot that allows it to navigate turns — remained on the bridge, with the other half vertical, its smashed front end resting on a ramp connecting the two expressways.

“The bus fell approximately 50 feet onto the access road. The patients suffered injuries consistent with a fall from such a great height,” Deputy Fire Chief Paul Hopper said in a social media post.

Speed appeared to be a factor in the crash, the Metropolitan Transportation Authority said, adding no mechanical issues were detected in the bus. The MTA said it was conducting “a full investigation and will implement lessons learned in order to prevent it from happening again.”

The driver, whose name was not released, was driving his regular route. He has more than 11 years of service and a good safety record, the MTA said. The driver passed a breath test at the scene of the crash but then refused to submit to a later drug and alcohol test at the hospital, said Patrick Warren, the MTA’s chief safety and security officer.

“This is obviously troubling,” Warren said.

US jobless claims rise to 745,000 as layoffs remain high with economy still under pressure from virus