TRENTON, N.J. (AP) — A New Jersey man who said he was standing next to a woman when she was fatally shot during the U.S. Capitol riot is now charged in connection with last week’s breach.

Thomas Baranyi, 28, was arrested Tuesday night by the FBI and charged with disorderly or disruptive conduct. He made his initial court appearance later that night via video conference, where bail was set at $100,000, but he was later released on an unsecured bond.

Baranyi, who formerly served in the Peace Corps, gained attention on the day of the riots when he told a TV reporter that he was standing next to Ashli Babbitt when she was fatally shot inside the building, and held up his right hand to show blood that was still there.

In a criminal affidavit, FBI Special Agent Cassidy Vreeland wrote that Baranyi’s identity and actions inside the Capitol were confirmed through the interview he gave to a local TV station and through online videos and photos. One video showed Baranyi standing next to Babbitt as she was shot, according to the affidavit.

“It could have been me, but she went in first,” Baranyi told the interviewer, according to the affidavit.

The Capitol police officer who shot Babbitt, a Trump supporter who was trying to climb through a broken window into the speaker’s lobby, has been placed on administrative leave per agency policy, and the shooting is under investigation by Capitol police and the Metropolitan Police Department.

Baranyi was represented at his initial court hearing by a federal public defender, but told the judge he has retained a private attorney, whose name was not disclosed. 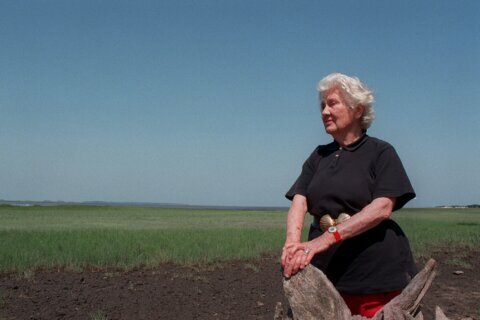