NEW YORK (AP) — Calling a hospital to see if a bed was available for a COVID-19 patient isn’t part of Houston television news anchor Chauncy Glover’s job description. Neither is guiding a viewer online to find a place to be vaccinated.

He’s done both, and isn’t alone. Listeners and readers across the country are reaching out directly to journalists for help during the coronavirus pandemic, and many are responding.

“We are now doing more than we bargained for,” Glover said. “We have to be smarter on these topics. We have to know more. For so many people, it may be life or death.”

It began for Glover last spring, when he came down with COVID-19 and told his story to KTRK-TV viewers. By phone, email and text, he was peppered with questions after getting back to work: What did it feel like? Should I be worried if I have this symptom? What did you do during quarantine to keep from going crazy?

One viewer described symptoms that made Glover suggest he go to the hospital, and the news anchor followed up with calls to find space for him.

During the past month, inquiries about how to get vaccinated have become most common. Southern California Public Radio, which has an aggressive community outreach program, had 275 questions about that in a two-day period last week, said Ashley Alvarado, director of community engagement.

Listeners have also asked Alvarado’s team about unemployment benefits, about whether or not they should cancel a family wedding or if it was illegal to hold a graveside service for a relative who died.

Alvarado frequently tips reporters to potential stories based on what her department hears. Similarly, questions that science and medical reporter Lisa Krieger gets are fodder for features and consumer tips published in the Mercury News of San Jose, California, and partner newspapers in the Bay Area News Group.

CC Davidson-Hiers, a reporter for the Tallahassee Democrat in Florida, has lost track of how many requests she’s gotten, many from elderly readers who can’t navigate online vaccination sign-ups.

It’s an abrupt turnaround from last year, when her inbox was filled with vitriol from people who called her an alarmist or worthless human being trying to scare people, just because she was writing about COVID-19.

Now, she emails links and suggestions to readers who contact her. When she gets calls, she will stay on the line and walk people through the process when they’re struggling with the internet.

“I absolutely love doing it,” Davidson-Hiers said. “I have to keep an eye on how sustainable it is. It’s something we’re all facing — the pressure of the pandemic and the stress of it all.”

Alvarado has staggered the work hours of people answering calls and similarly guards the mental health of colleagues who hear stories of trauma over and over again.

Several of the people Krieger speaks to are simply grateful to hear another human being, instead of speaking to machines and getting calls dropped, or directed to an alienating online experience.

Krieger has spent nights and weekends answering messages. She speaks to church groups and her newspaper has set up online seminars. She realizes that her first responsibility is to report and write stories, but said management has supported her efforts to help readers.

“This is payback time for us,” she said. “These are readers who are very loyal and they need us. The least we can do is return their calls and emails.”

Alvarado similarly tries to break down cultural barriers, and sends out a regular text message of coronavirus news to listeners who don’t have Internet access.

“For me, it’s rewarding,” Glover said. “You work so hard to become that voice that people turn to and they trust what you’re saying. To me, that’s the ultimate goal of a journalist — to be trusted.”

Davidson-Hiers generally guides people to help themselves. But on two occasions — once for a person who had no internet and another for someone at a loss for how to use it — she has set up vaccination appointments for readers.

In retrospect, she was queasy for ethical reasons. Journalists are trained to observe and report, not to get involved in their stories.

There’s nothing wrong with doing your best to help people with information, said Kathleen Culver, director of the Center for Journalism Ethics at the University of Wisconsin. But it’s wise to avoid situations where you learn someone’s medical records, or make a specific medical appointment or recommendation, she said.

What if something goes wrong?

“I make sure I stay within my boundaries,” Glover said. “I don’t think there’s anything wrong with helping people navigate a website. I’m not picking people up and taking them to doctors’ appointments or driving them to the hospital.”

Despite the extra work involved, San Jose’s Krieger and many of her colleagues are happy to find another way of connecting their news organizations to the communities they serve.

“Over recent years we’ve been told that journalism is dying and is becoming obsolete,” she said. “It’s gratifying to be a comfort to readers and provide them with information they literally can’t get anywhere else. It’s so rewarding and it’s why we’re in this business.” 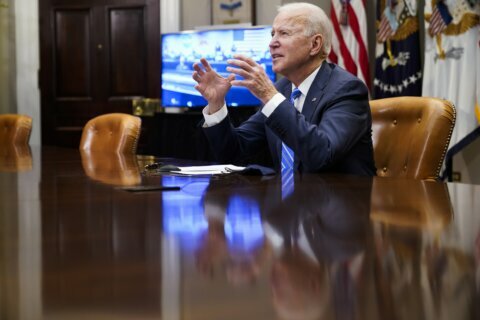 US trade deficit up 1.9% in January on record goods imports