BOISE, Idaho (AP) — When President Trump-supporting insurrectionists on Wednesday stormed the U.S. Capitol in an attempt to overturn the presidential election, the nation was shocked. But not unwarned.

A series of dress rehearsals of sorts have played out in a handful of statehouses across the country in recent months. In May, armed protesters forced their way into the Michigan Statehouse to object to pandemic-related lockdowns.

In August, self-styled “patriots”, anti-vaccination groups and other protesters temporarily derailed a special legislative session in Idaho that was called to address pandemic-related election issues. Less than three weeks ago, crowds forced their way into the state Capitol in Salem, Oregon, to protest the building’s closure to the public during a special legislative session on coronavirus measures.

“There’s a direct relationship between the growing paramilitary activity in the state Capitols, for sure, and what’s happening in D.C.,” said Joe Lowndes, a political science professor at the University of Oregon who researches race, conservatism and social movements in politics. “They have the same kind of organizations and people involved.”

In other words, the states — once called the “laboratories of democracy” by Supreme Court Associate Justice Louis Brandeis — have become training grounds for violent dissent. There are concerns that the unrest could continue, or get worse, as legislatures across the country return for sessions this month.

“It’s that idea of the takeover as an act, partly as a symbolic act and partly as an act of direct political action,” Lowndes said.

The Idaho Statehouse, with its classic sandstone and marble construction and soaring, eagle-topped dome, is one of a handful in the country designed to evoke the architecture of the U.S. Capitol. In August, angry protesters led by anti-vaccination groups and an anti-government organization started by Ammon Bundy called “People’s Rights” disrupted a special legislative session in part because they opposed a proposed law meant to shield businesses from liability related to the coronavirus.

The protesters forced their way past police and into an Idaho House gallery with limited seating because of the pandemic. The window of a glass door was shattered as the crowd shoved and pushed its way through the entry. Republican House Speaker Scott Bedke, seeking to avoid violence, then gave the order to allow the protesters inside.

The next day, there were more disruptions. Shouting attendees prompted lawmakers to stall a hearing and Bundy was arrested and wheeled out of the building in an office chair.

In a Thursday morning phone interview with The Associated Press, Bundy acknowledged that his protests in Idaho may have inspired some protesters in Washington, D.C. Bundy made international headlines in 2016 when he and his supporters stormed the Malheur National Wildlife Refuge in rural Oregon and staged a 41-day armed occupation in support of ranchers who’d been arrested for arson on federal grazing land.

“All over the states, all over the country, we have a situation where government officials think they can go behind closed doors and make decisions for the people where the people are not able to witness it,” Bundy said. “Maybe they needed a reminder by us, but this is something that’s traditional in our country that our founders did — reasserting the premise that the people are the ones who are sovereign.”

People’s Rights in recent weeks urged members to use the Jan. 6 protests in Washington D.C. to recruit more members and make signs, pamphlets and even business cards available to members headed to the protests. Bundy didn’t attend, and said he was unaware that crowds had besieged the U.S. Capitol until he returned home from time in the mountains Wednesday evening.

“I do feel like it was a great opportunity to unite people or make people aware of the tools that are available for them to unite,” he said. “I think it was John F. Kennedy who said the best: ‘Those who make peaceful revolutions impossible make violent revolutions inevitable.'”

In December, crowds stormed Oregon’s state Capitol in opposition of the building’s closure to the public during a pandemic-related special session even though lawmakers had already taken public comment on the measure. A number of protesters, including at least one armed with an AR-15, got inside the building and used pepper spray against state troopers in a tense standoff.

People’s Rights at one point during the clash sent a text message to supporters urging them to come to the Capitol and fight the troopers.

Jay Ulfelder, a fellow at Harvard Kennedy School’s Carr Center for Human Rights Policy, said some of the initial protests at statehouses after the election made sense as Trump loyalists sought legal avenues to contest the outcome. But as courts rejected those efforts, weekly protests at the California Statehouse and elsewhere grew “ritualized,” Ulfelder said, and organizers began planning next steps on online social media forums like Parler.

“Anybody who was surprised by the fact that they stormed the Capitol, I don’t know where they were. These people were saying for weeks that this is what they were going to do,” Ulfelder said. He thinks many far-right and extremist groups saw the siege in Washington, D.C., as a recruiting tool.

Ulfelder said that if there aren’t efforts to stop mobilization efforts and negative consequences for far-right, extremist groups, he worries “we’re moving toward this space these groups are energized and they’re able to move around with impunity with guns and threaten people in Statehouses.”

Jaclyn Kettler, political scientist at Boise State University, noted that in many smaller states, Capitol buildings typically allow broad access to the public. Limiting access during the pandemic prompted some protests in Idaho and elsewhere.

She wonders if the pushback and demonstrations will continue as legislatures return to session.

Indeed, protests by far-right militia groups are planned in Olympia, Washington, next week when the Legislature convenes there.

“We know that the threat level has increased dramatically,” Washington Gov. Jay Inslee said Thursday. “We will provide a secure environment.” 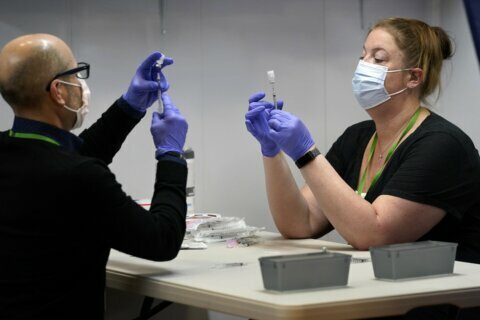