Snow continued to fall Thursday during a key period in the coronavirus pandemic, days after the start of the U.S. vaccination campaign and in the thick of a virus surge that has throngs of people seeking tests daily.
Listen now to WTOP News WTOP.com | Alexa | Google Home | WTOP App | 103.5 FM
(1/7) 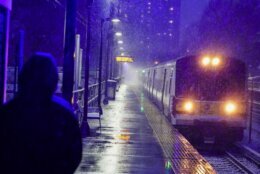 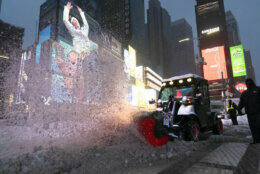 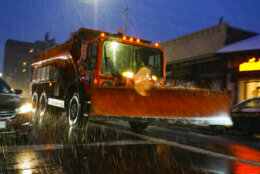 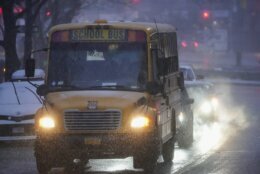 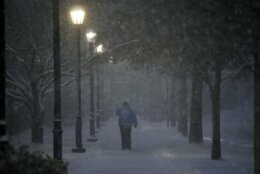 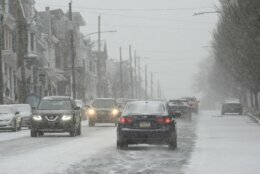 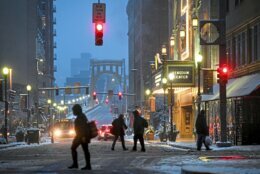 GLENVILLE, N.Y. (AP) — The Northeast’s first whopper snowstorm of the season buried parts of upstate New York under more than 3 feet (1 meter) of snow, broke records in cities and towns across the region, and left plow drivers struggling to clear the roads as snow piled up at more than 4 inches (10 centimeters) per hour.

“It was a very difficult, fast storm and it dropped an unbelievable amount of snow,” Tom Coppola, highway superintendent in charge of maintaining 100 miles (160 kilometers) of roads in the Albany suburb of Glenville, said Thursday. “It’s to the point where we’re having trouble pushing it with our plows.”

The storm dropped 30 inches (76 centimeters) on Glenville between 1 a.m. and 6 a.m. Thursday, leaving a silent scene of snow-clad trees, buried cars and laden roofs when the sun finally peeked through at noon.

“If you do not have to be on the roads, please don’t travel,” said New York Gov. Andrew Cuomo, who declared a state of emergency for 18 counties. He said there were more than 9,000 power outages, 600 accidents and two fatalities by midmorning Thursday.

In New Rochelle in Westchester County, where a foot of snow was recorded, the roof of a Mavis Discount Tire store partially caved in but no injuries were reported, according to CBSN New York.

In Broome County, where the regional center of Binghamton got a record 42 inches (107 centimeters) of snow, County Executive Jason Garnar said snow fell at a rate of 4 to 5 inches (10 to 12 centimetres) per hour.

“This is the fastest rate of snowfall I’ve ever encountered,” he said.

In Ithaca, it took Fred Cullin, 23, more than an hour and a half to dig out of his steep, lakeside driveway that was packed with nearly 3 feet of snow piled up by plows.

“It was pretty crazy,” Cullin said. “Shoveling uphill, on ice, was definitely interesting.”

Much of Pennsylvania saw accumulations in the double digits.

Boston had more than 9 inches (23 centimeters) of snow early Thursday morning, breaking the previous record for the date of 6.4 inches (16.3 centimeters) in 2013. In Boston’s Seaport neighborhood, the streets were mostly empty except for an army of workers blowing sidewalks clear in front of luxury apartment buildings, stores and office towers.

“It’s been a while since we have had this,” said Mark Pusung, a 33-year-old Seaport resident walking his Shar-Pei dog Muffin. “I wanted my dog to experience it because he could run around.”

Xicheng Cai, 28, a consultant who lives and works in Seaport, was decked out in what he called his full polar gear including boots, windproof pants and ski goggles.

“Wonderful,” he said of the snow. “This is what Christmas should look like.”

A few blocks away, Sara Boxell, 33, who lives in South Boston, was in the middle of her 4-mile run.

“I love it,” she said. “Luckily, I’m working from home so I don’t have to drive anywhere.”

Massachusetts’ transportation chief said it could take longer than usual to clear snow-clogged highways and streets because the coronavirus pandemic has knocked one in 10 plow drivers out of action.

Parts of northern New England saw as much as 7 inches (18 centimeters) of snow per hour, said Margaret Curtis, meteorologist for the National Weather Service. A rate of 1 inch per hour is typically enough to make it hard for snowplow trucks to keep up.

Hazardous roads caused dozens of crashes in New Hampshire, Connecticut and eastern New York. New York State Police said a snowmobiler was struck and killed by a tractor-trailer on Interstate 787 in downtown Albany at 2:30 a.m.

In Maine, snowboarder Fletcher Moffett grabbed a few runs at the Sunday River ski resort before reporting to work as a bartender.

“Being outside is keeping me sane” during the pandemic, he said.

The overnight snowfall eclipsed the entire amount recorded for all of last winter in New York City, where 6.5 inches (16.5 centimeters) of snow covered Central Park — much less than the initial predictions of up to 12 inches (30 centimeters). Snowplows were careful to avoid damaging outdoor dining spaces erected for the pandemic at Manhattan restaurants, where dining was to resume Thursday night.

In a lighthearted moment at a daily briefing by Mayor Bill de Blasio, the official in charge of snow removal, Edward Grayson, cautioned: “It’s not a night to wear your good shoes.”

Contributing to this report were Associated Press writers Thalia Beaty and Tom Hays in New York; Sophia Tulp in Atlanta; David Sharp in Portland, Maine; and Bill Kole and Michael Casey in the Boston area.

Reaction to the death of Larry King