In-betweenland: As 2020 slips away, an American snapshot

GLENSHAW, Pa. (AP) — The enormous signs, selling for just $9.99, greet shoppers at the suburban supermarket’s entryway, carrying a holiday message that means something very different this year: “GATHER,” they shout, even as the state’s governor urges citizens to do precisely otherwise.

To come together or to stay apart: one of the countless, sometimes excruciating dilemmas that Americans find themselves caught between as a disheartening year is finally and enthusiastically shown the door.

As most years wind to their ends, people in the United States press pause on life’s movie — if we can. We take stock, review successes and mistakes, make resolutions, vow it will be better this time.

This year, buffeted by these December whirlwinds, Americans find themselves at a crossroads unlike any other in our history. This time around, though, the republic itself is caught in that in-betweenland right alongside us — exhausted by the year, stumbling to its conclusion. Hopeful, but unsure, about what comes next.

Those who find their wisdom in song lyrics might find one 1970s hit appropriately captures the times: “Clowns to the left of me. Jokers to the right. Here I am, stuck in the middle with you.”

This year, this moment of purgatory when American life perches between an unimaginably scrambled 2020 and a 2021 filled with unabashed hope, is different.

“Don’t let yourself surrender to the fatigue,” President-elect Joe Biden said a few weeks ago. He was referring to the pandemic. He might as well have been talking about the entire year.

As the December holidays inch along, the in-between moments are many and mystifying:

— After 10 months of pandemic and lockdown, angst and anger and economic upheaval and death by the hundreds of thousands of souls, Americans are poised to receive — or to refuse to receive — vaccines that could mark the beginning of the end.

— As a new president prepares to take office, the current one — a disputatious man who has upended uncounted political, social and civic norms during his one term in office — persists in his evidence-free insistence that he won the election.

— Control of Congress is in the balance and will be until Jan. 5, when runoff elections in Georgia will decide the majority in the U.S. Senate — and impact uncounted chunks of 2021.

— The centuries-long march toward American racial equality lurched forward vigorously in 2020 before the momentum paused or, at least, slowed — and produced some ugly backlash. What comes next?

— Cultural polarization, its flames licking high from the bottomless propane tank that is social media, has split society into what feels like a million little pieces. There’s no obvious route back in 2021 — and, some have argued, there should not be.

Yet fragmentation — sometimes the natural byproduct of democracy, which is messy and diverse by design — does not necessarily serve Americans well in this case.

Unlike almost all other nations, the United States was created not around centuries of common culture. Instead, it has been stories that form the ties that bind: the city upon a hill. Life, liberty and the pursuit of happiness. All men are created equal. Go west, young man.

What 2020 revealed (and what some Americans have long said) is that those tales are not as true or inclusive as some would believe — that while this land embodies and nurtures some of those traits, swallowing the American story whole is a self-blinding endeavor.

Unfortunately, the opposite is disruptive, too. The national fragmentation, exacerbated by 2020’s challenges, is confusing, combustible and complex.

“We’re not living in the same country, we’re not reading the same news, we’re not seeing the same story,” says John Baick, a historian at Western New England University. “There is no narrative. There are only counternarratives. And people — are they even looking at narratives? Or are they just following some hyperlinks?”

The cacophony has placed the bizarrely tangential alongside the momentous, sometimes at equal volume. The result: a fun-house mirror of American life. “We’re obviously in the Matrix,” people say, citing their “2020 Bingo” cards.

It’s easy to believe such a conclusion when an unexplained metal monolith appears in the Utah desert. When a network releases a movie featuring a sexy Colonel Sanders. When Ronald Reagan, dead 16 years, summons us to arms from the latest version of “Call of Duty.”

When 2020 has been so discombobulating that Pantone decides its new color of the year is actually two hues — a gray and a deep yellow, designed to be “practical and rock solid but at the same time warming and optimistic.”

“We need to feel that everything is going to get brighter — this is essential to the human spirit,” Pantone says. No argument there.

What happens next? Is there a “back to normal”? A new normal? Something else? Is this just a moment in American life, or something more extended?

Two things happened in the United States recently, both of which offer potential insight.

The first: Last month, the news surfaced that Roadside America, one of rural Pennsylvania’s most enduring attractions, was closing after eight decades. The place, born of one man’s childhood memories, grew into a model railroad landscape that filled an entire building. Now its detailed miniature representations of American life in the early and mid-20th centuries are being dismantled and auctioned off beginning Monday.

What a metaphor for 2020: the nation we once knew, split into fragments and scattered to the winds. This is the pessimistic storyline.

Yet Lyon Gardiner Tyler Jr.’s death in October at age 95 suggests a counternarrative.

Tyler was the grandson of the 10th president, John Tyler, who was born in 1790. His brother, Harrison Ruffin Tyler, is still living.

Think about that. Three generations of Americans spanning 230 years. Nearly the entire history of the United States playing out over three lifetimes.

Yes, time feels out of joint these days. Yes, the lack of distinct markers in American life in 2020 — full-on Christmas celebrations, entire sports seasons, a normal year’s spikes and valleys — has suspended us in a cloudy amber of COVID and fear and contentiousness.

“Our memories of this moment are going to be muddled and confused,” says Jennifer Talarico, a psychology professor at Lafayette College who studies how people remember their lives, and how public events affect that. “We’re going to be left with this vague notion that’s going to be hard to articulate, hard to describe, hard to capture for those folks that haven’t been through it.”

Yet those who fret about the republic crumbling ignore the convulsions of death and ugliness that Americans have navigated in 244 years. They forget that moments ebb into other moments. That things continue and, sometimes, improve. That a man walks the Earth today whose grandfather had living memories of the George Washington administration.

From that vantage point, the United States is barely a teenager. Left alone, it will eat junk food and scroll its phone until 3 a.m. It will test boundaries and taunt others with whom it disagrees. It won’t do the dishes or take out the garbage. Sometimes, it will seem to have no future other than playing XBox, watching “The Bachelorette” and eating Flamin’ Hot Cheetos.

Remember, though, as 2021 creeps in: Teenagers are the ultimate embodiment of in-betweenness — caught between two confusing eras, never quite sure what of yesterday to retain and what of the future to grab at and make real.

And teenagers, of course, grow up. 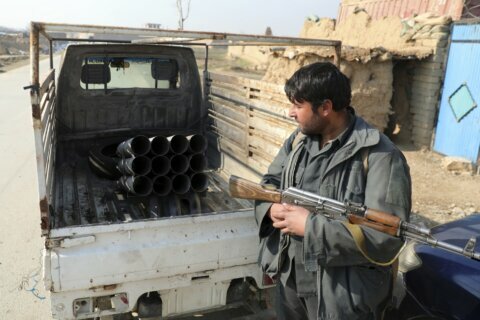