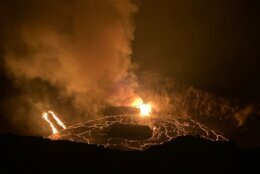 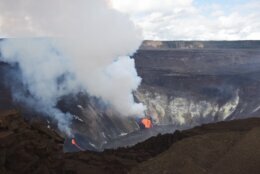 HONOLULU (AP) — A Hawaii volcano that began erupting for the first time in two years continued Wednesday to gush lava from two vents in its summit crater, but the molten rock posed no threat to people.

The Hawaiian Volcano Observatory said a lake of lava that’s formed in the crater had grown to be 470 feet (143 meters) deep as of late Tuesday.

Kilauea volcano began spurting lava Sunday after two years of relative silence. The quiet came after more than three decades of continuous eruption stretching from 1983 to 2018. About 700 homes were destroyed when lava surged through volcanic vents in a residential neighborhood during the last year of that episode.

The lava bursting out of the ground during the latest eruption is contained within Halemaumau, a massive crater within Hawaii Volcanoes National Park.

The volcano has also unleashed large volumes of sulfur dioxide, estimated at about 30,000 metric tonnes (33,000 tons) per day as of Monday.

State Department of Health officials have urged people to be aware of potential hazards from the volcanic gas, which becomes volcanic smog, or vog, when it mixes with dust and sunlight. During previous eruptions, heavy vog has damaged agricultural crops in regions near the crater and aggravated health conditions like asthma.

Kilauea is one of the world’s most active volcanoes.