ATLANTA (AP) — Georgia Gov. Brian Kemp is blasting attacks on his wife and daughters by people who want him to overturn Joe Biden’s victory in Georgia and says conspiracy theories about the election need to stop.

President Donald Trump has excoriated Kemp for not calling a special legislative session to give him the state’s electoral votes. Kemp on Thursday did not blame Trump for the attacks on his family and him, but said “people need to deal with facts,” news outlets reported.

“If anybody has an issue with something I’ve done, they can come to me, and I will talk to them about it,” Kemp said, according to WSB-TV. “They don’t need to bother my wife and my children or another elected official’s wife and children. I can assure you I can handle myself. And if they’re brave enough to come out from underneath that keyboard or behind it, we can have a little conversation if they would like to.”

The Republican governor said his children have been targeted in social media posts. His daughter Lucy has received hate-filled messages with wild conspiracies about the death of her longtime boyfriend, Harrison Deal, who was killed in a traffic accident this month west of Savannah.

Kemp said his relationship with Trump is “fine” and though he understood the president’s frustration, he had to follow the laws and Constitution of Georgia. 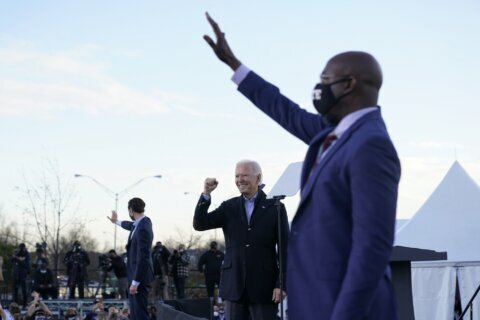