Two Wisconsin siblings returning from a Christmas lights display were killed Tuesday night when a suspected carjacker fleeing from police drove the wrong way on Interstate 95 in central Florida and collided head-on with their vehicle, authorities said.

The suspect also died in the crash on I-95 near Daytona Beach after fleeing police at speeds up to 120 mph (193 kph) in a vehicle authorities say was stolen at gunpoint from an Orlando area pizza delivery driver.

A 21-year-old man from Omro, Wisconsin, and his 18-year-old sister were killed in the head-on collision, and two of their relatives in the backseat were seriously injured. The driver and his sister were following their parents after viewing the holiday display at the Daytona International Speedway, said Volusia County Sheriff Mike Chitwood.

Bodycam video posted on YouTube by the Volusia County Sheriff’s Office shows a deputy chasing the suspect and detailing his speeds and maneuvers. The deputy jumps off the chase when the driver hits his brakes and heads the wrong way up the interstate. Another deputy’s bodycam shows video as he arrived at the crash scene.

Chitwood said the Wisconsin family just missed their exit just before the crash happened. The Florida Highway Patrol said the suspect had his license revoked last January, and Chitwood said he had a 200-page criminal history that included 50 previous arrests and eight stays in prison. He flipped the pages of the history at the news conference to emphasize the point.

“Everything he did — everything he did — was about destroying somebody’s life,” Chitwood said choking up with tears several times. “If there was fairness, he would have crashed into the median and killed himself and we wouldn’t be here on the discussion.”

The highway patrol identified the suspect only as a 47-year-old Orlando man. Authorities did not release the man’s name because his family had not been notified of his death. They also didn’t release the names of the victims.

A license plate reader in a neighboring county identified the stolen car, and an officer located the vehicle. The driver then fled, got on the interstate and weaved between cars at high speed with its lights off, Chitwood said.

He then hit the brakes and did a U-turn on the interstate, driving northbound in the southbound lane before colliding with the other vehicle. 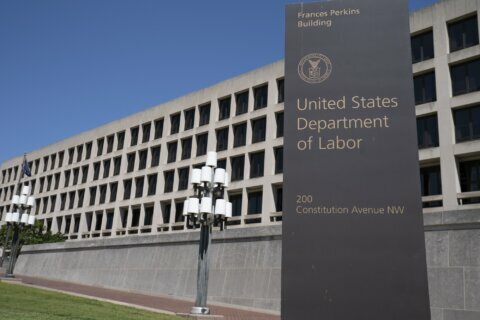