Two people are dying of COVID-19 every hour in California's most populous county as the state set daily records for newly reported cases and deaths and hospitals struggle to keep up with the surge of coronavirus patients.
Listen now to WTOP News WTOP.com | Alexa | Google Home | WTOP App | 103.5 FM

The nation’s most populous state has recorded more than 1,000 deaths in the last five days. Its overall case total now tops 1.7 million, a figure nearly equal to Spain’s and only surpassed by eight countries. The state’s overall death toll has reached 21,860.

Many of California’s hospitals are running out of capacity to treat the severest cases, and the situation is complicating care for non-COVID patients.

“It’s pretty much all COVID,” said Arlene Brion, a respiratory therapist at Fountain Valley Regional Hospital in Orange County, where she’s assigned six or seven patients rather than the usual one to three. “There’s probably two areas that are clean but we’re all thinking eventually it’s all going to be COVID.”

Los Angeles Mayor Eric Garcetti revealed his 9-year-old daughter has the virus and is recovering with mild symptoms while he and his wife tested negative. The family is quarantining.

Garcetti gave a stark briefing to city residents, warning that within days LA County may declare a systemwide crisis with all hospitals out of usual space and staffing. The hospitals are planning by identifying areas such as parking lots and conference rooms that can be used for patient care.

He also reminded residents that the governor earlier announced the state had ordered 5,000 additional body bags and has dozens of refrigerated trucks ready to use as temporary morgues to handle bodies too numerous for existing morgues.

“That frightens me, and it should frighten you,” Garcetti said.

Also Thursday night, U.S. Rep. Katie Porter, a Democrat who represents a district in Southern California, told CNN that she is self-quarantining after being exposed to someone with the virus.

“I think it’s an experience that’s all too familiar for all too many Americans at this point. I was exposed to someone who has tested positive. I’m doing my very best to quarantine here at home,” the California Democrat told CNN’s Don Lemon on “CNN Tonight.”

Porter said she took a coronavirus test earlier Thursday but is going to “lock myself in my bedroom for the next couple days” until the test comes back.

The massive rise in infections began in October and is being blamed largely on people ignoring safety measures and socializing with others. More recently, health officials said they have seen cases stemming from gatherings during Halloween and Thanksgiving and have pleaded with residents to avoid getting together with people from other households over Christmas and New Year’s.

Based on the science of transmission of COVID-19, the “devastation we are experiencing now” is due to infected people being in close or direct contact with another person or group long enough to infect them, said Dr. Muntu Davis, the Los Angeles County health officer.

Amy Arlund, a nurse at the COVID-19 unit at the Kaiser Permanente Fresno Medical Center, said it takes counseling for her to be able to show up for work every day, and she is frustrated that her community is again going through a surge of infections.

“We’re treated like we’re expendable,” she said. “We’re supposed to be the most trusted profession in the United States, and if we are so well trusted, why aren’t people listening to us?”

Amid the surge, San Diego County suspended enforcement of COVID-19 restrictions on restaurants and live adult entertainment establishments. The move came after a judge extended his order protecting two strip clubs from a state shutdown order and surprisingly said the ruling applied more broadly to restaurants.

San Diego Superior Court Judge Joel Wohlfeil said the government presented “no evidence” the establishments that have implemented safety requirements are contributing to the surge,

California has opened five alternative care facilities, including a former NBA arena in Sacramento and two state-run developmental centers, to try to ease the burden on hospitals. Another 1,555 beds were in what state officials are calling “warm status,” meaning they can be ramped up within days to receive patients, expected to be at the skilled nursing level of care.

State officials also are continuing to talk with the Defense Department about using the staff from the USNS Mercy hospital ship, even if they don’t use the ship itself. The Mercy was brought to Los Angeles for a time early in the pandemic to take pressure off hospitals by handling non-COVID cases but ultimately saw very few patients.

In San Francisco, public health director Dr. Grant Colfax said Thursday a travel quarantine is being ordered because of the high number of cases in other parts of the state and country. The city is averaging a record high of 242 new cases a day, although the rate of increase has “slowed just a bit,” meaning there’s still time to turn the “dire situation” around, he said.

San Francisco will require a mandatory quarantine of 10 days for anyone coming to the city from outside the 10-county San Francisco Bay Area. The order also discourages non-essential travel within the region. It goes into effect Friday and expires Jan. 4.

The travel quarantine exempts medical professionals, first responders, and government and other essential workers traveling for essential purposes. People traveling because they need medical care or ordered by a court are also exempt.

Brion, the respiratory therapist at Fountain Valley, said patients seem to be arriving much sicker than earlier in the pandemic.

“This is probably the worst that I’ve seen with this virus,” she said. “It’s hard to see because we know all these patients are eventually not going to do well.”

“We have to watch these patients suffer in terrible ways and they suffer in isolation and alone because it’s the only way that we can prevent their family members and visitors from getting this virus,” she said. 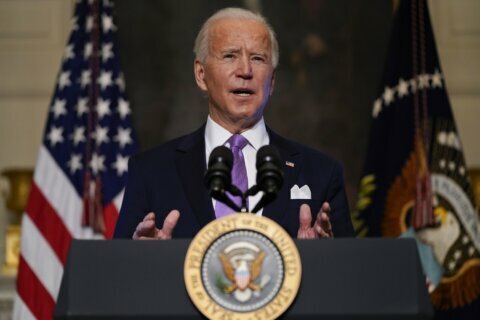