NYC schools may close ‘as early as Monday’ as cases spike

New York City Mayor Bill de Blasio warned parents on Friday that they should be prepared for a return to fully remote learning “as early as Monday,” CBS New York reported. The announcement comes as the city rapidly approaches the 3% COVID-19 positivity rate threshold that will trigger school closings.

The mayor noted that “very few people” have tested positive in schools — according to CBS New York, the positivity rate in schools is less than 1%. But de Blasio said that the city’s higher rate means “we’ve got to act out of an abundance of caution.”

“Have a plan, an alternative plan, for as early as Monday,” the mayor said, adding that if schools were forced to close, “the goal is bringing it back as soon as possible.”

Schools chancellor Richard Carranza told principals on Thursday that he thinks there will be “a brief time of fully remote learning systemwide,” according to CBS New York. 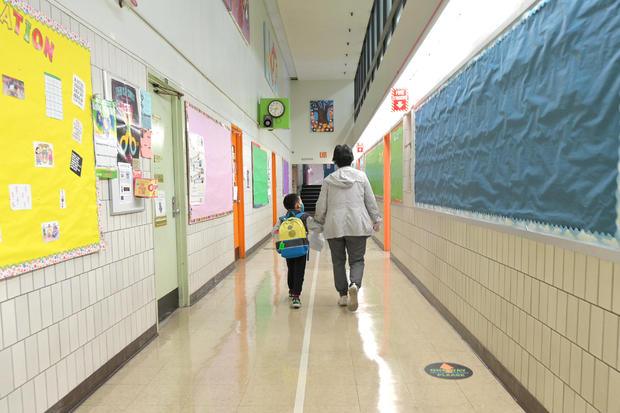 The city’s positivity rate is now at 2.83%, the city health department reported. The New York State threshold for closing schools is 9%, but an agreement with the teacher’s union mandates a 3% threshold in New York City because the schools there are more densely packed.

Some parents are frustrated about the potential return to remote learning. “The in-person is much more impactful and empowering. I can’t do what the teachers do,” one parent told CBS New York.

Another parent told CBS News’ Meg Oliver that fully remote learning would be extremely difficult for her 3-year-old son, who is autistic. “He cannot sit for more than 10 minutes at a time. After that, he’s just frustrated, he’s crying,” she said. “It’s been really difficult.”

The potential closing comes as communities across the nation are implementing new restrictions to combat a deadly surge in coronavirus cases. CBS News reported Thursday that the number of new cases recorded each day in the U.S. has doubled in just three weeks, and that Americans are now dying at rates that haven’t been seen since the worst months of the pandemic.